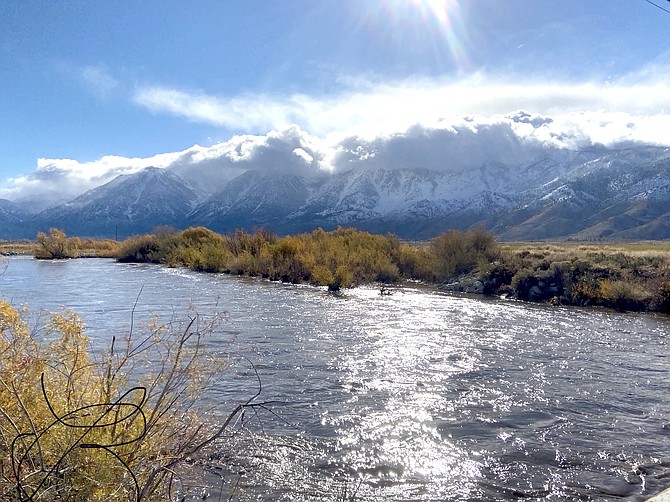 'It was wonderful to see the East Fork full after the rain,' photographer Laura Bridwell said. This photo of the river with Jobs Peak in the background was taken from the Muller Lane bridge.

A record-breaking atmospheric river dropped an estimated 24 billion gallons into Lake Tahoe, increasing it to a half-foot above its natural rim.

An inch of Lake elevation is the equivalent of around 4 billion gallons of water, according to the University of California Davis Tahoe Research Center.

According to the U.S. Geological Survey gage, the Lake level peaked at 10 a.m. Monday at .56 feet over the rim.

Tahoe dropped below its natural rim on Oct. 12, just two weeks ago, to much fanfare.

Sunday and Monday saw 3.05 inches of rainfall in Minden, making it the second wettest October in 115 years of record-keeping.

A gauge a mile north of Genoa recorded 3.55 inches an hour earlier and wound up with a total of 4.21 inches by the time the rain stopped on Monday afternoon.

The East Fork of the Carson River at the Old Power Dam south of Gardnerville crested at 12.82 feet, just short of action stage on Monday morning,

The river’s West Fork crested at 13.51 feet, a fraction of an inch above the minor flood stage before receding.

Flooding in Johnson Lane resulted in water being shut off to residents near Piñon Hills Elementary School after a hydrant at Downs and Stewart was washed out by flood waters.

Other than the outage, there wasn’t significant flooding in the northern Carson Valley neighborhoods.

Heavy wet snow fell in the Sierra bedeviling motorists and utility workers as lines collapsed as a result of the weather.

There were a few instances of power poles catching fire at Lake Tahoe.

The National Weather Service reported a foot of snow fell 3 miles southwest of Meyers, with 5 inches falling near South Lake Tahoe and 9 inches at Tahoe City.

With the storm’s passing, sunny skies and warmer temperatures are forecast to return for the rest of this week. Expect temperatures to climb to around 67 degrees by Friday’s Nevada Day holiday, with morning lows remaining above freezing.

Warmer temperatures will result in much of the snow that fell over the last two days will melt off in lower elevations.