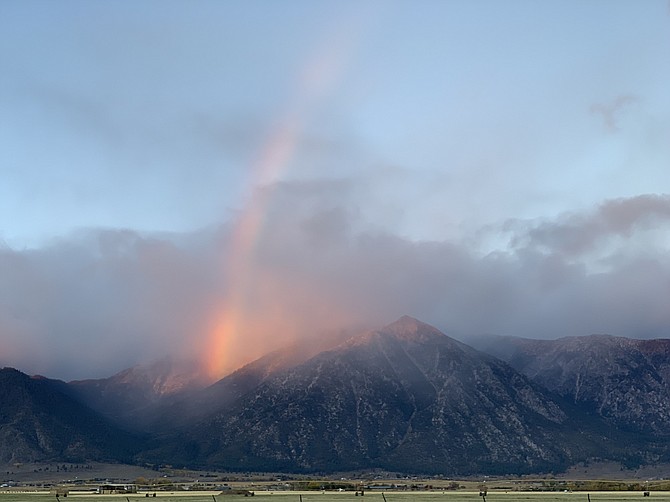 Michael Smith caught this rainbow on Thursday morning. There's more rain in the forecast with a possible atmospheric river winding its way toward the Central Sierra.

A predicted atmospheric river is forecast to bring as much as 3 inches of rain to Carson Valley on Sunday, according to the National Weather Service.

“We are going to be unusually wet through early next week, potentially setting precipitation records for October in some locations if things continue to look the way they are looking,” Reno meteorologists said on Friday morning. “A significant atmospheric river is still on track for the late weekend into early next week with heavy rain and mountain snow looking almost certain.”

Forecasters said Sunday’s storm is anomalous and is showing possible liquid totals higher than any event in the last 20 years.

Over the 115 years records have been kept in the Douglas County seat, there have been 22 Octobers that have seen more than an inch of precipitation fall during the month.

Minden has only seen .02 inches of rain during October as of Friday morning, though that’s more than October 2020, which saw nothing. Other portions of the Valley have seen more rain with around a third of an inch falling in Genoa during the month, and even snow in the Valley on Oct. 11 and Oct. 18.

In response to the forecat for Sunday, Alpine County issued a flash flood and debris flow alert for Sunday through Monday for the Markleeville area. Blue Lakes Road is closing 1 p.m. Friday due to the storms.

Monitor, Ebbetts and Sonora passes will remain closed through the weekend and into next week.

The heavy rain and high snow level could bring the possibility of flooding to areas downstream from several wildfire burn areas, including Douglas County.

The hazard includes the areas burned in the Tamarack and Numbers fire in Douglas County and the Caldor Fire in Alpine County.

A winter storm watch has been issued for the Greater Lake Tahoe area which is facing a total snow accumulation of 1-3 feet above 8,000 feet with higher amounts possible in places.

There may be light snow accumulations below 8,000 feet and winds over the Sierra ridges of up to 100 mph with Sunday’s storm.

Forecasters warn that travel over Carson Pass could be difficult, and that back-country travel is not advised.

“Just keep in mind — we could see a dramatically different snow amounts at various elevations,” forecasters said. “Despite the copious amount of rain, the dry soils and large amount of available storage in reservoirs will mitigate widespread flood risks, especially for mainstem rivers, however they will see rises. Smaller creeks and streams tend to be more flashy and could be more of a concern.”