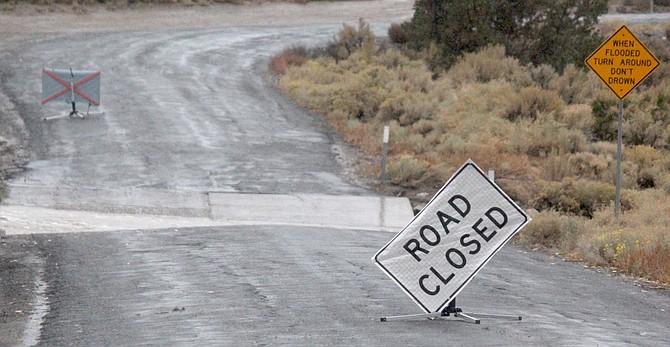 Fish Springs’ Creek Drive has turned into a river where it connects with Jacobsen Lane, according to Douglas County deputies.

Pine Nut Creek is filled up from rain that fell overnight on 2020’s Numbers Fire. There wasn't as much debris as there has been, and as of 8:30 a.m. most of the roads were open with just a little water over the roadways. Jo Lane was still closed then.

Johnson Lane residents on the Douglas County water system experienced an outage this morning. A hydrant washed out at Stewart Avenue and Downs Drive which affected customers near Piñon Hills Elementary School.

Deputies said that Mottsville and Centerville lanes in Carson Valley were clear of any flooding as of 4:40 a.m. That may be because West Fork’s crest is still making its way down river.

Centerville, which used to flood at the first hint of rain, was the subject of significant work between Highway 88 and Foothill over the last year to increase culvert size. A report that flood waters reached Mottsville came in at 11:05 a.m.

The potential for flooding in Carson Valley was slowed down by the early arrival of a blast of cold air that brought snow levels down earlier than expected.

Road controls are in effect for every route through the Sierra with traffic cameras showing heavy snow on Kingsbury, at Lake Tahoe and over Spooner on Highway 50.

A landslide closed Highway 50 over Echo Summit at around 9 p.m. Sunday as a debris flow from the Caldor Fire sent boulders down into the road, according to the California Highway Patrol.

Forecasters expect moisture from the atmospheric river to move through the region by this afternoon and evening.

Both forks of the Carson River are showing close to minor flood stage, with the West Fork at Woodfords at 13.51 feet just over the 13.5 feet minor flood level.

The East Fork is approaching the action stage at 12.82 feet, just short of the 13-foot action stage. The river is forecast to hit 13.6 feet later this morning.