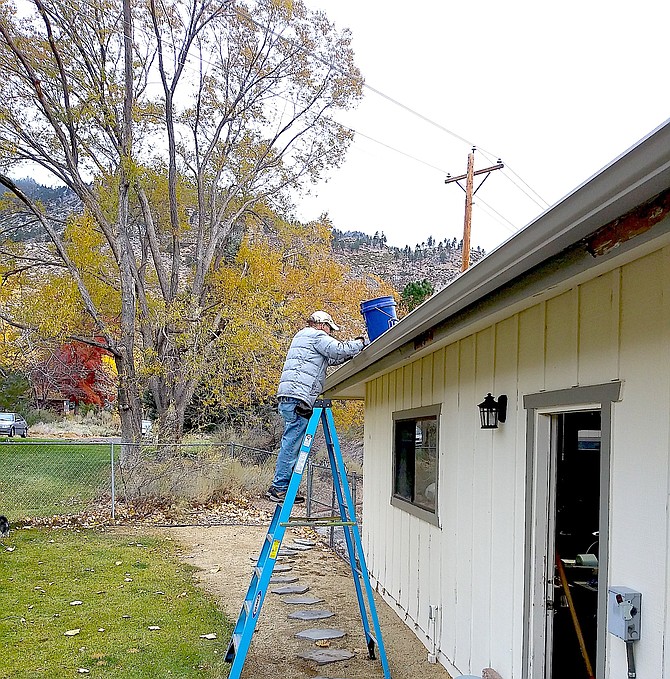 A Carson Valley resident cleans out the gutters in preparation for forecast heavy rain on Sunday.
Kathy Schuman | Special to The R-C

Douglas County officials are preparing for the possibility of flooding, especially near the Numbers and Tamarack burn areas.

The county has announced where its self-fill sandbag stations are located in anticipation of heavy rainfall.

As of Saturday evening, a flood watch is in effect from 5 a.m. Sunday to 11 a.m. Monday. A high wind warning goes into effect 5 a.m. Sunday through 11 p.m. as a forecast atmospheric river is expected to arrive.

The forecast for Minden calls for around 2 inches of rain on Sunday and Monday with as much as a quarter-inch an hour falling between 3 p.m. Sunday and 3 a.m. Monday.

Forecasters are warning residents near the burn areas to be alert to debris flows.

County officials are warning residents to monitor forecasts and watch out for flood warnings.

While forecasters say it’s unlikely that the Carson River will overtop its banks, residents should be aware that its possible that one or more bridges could close should the river rise.

It’s also possible that the lower portions of Centerville or Mottsville lanes could close due to high water.

While Minden remained fairly dry on Saturday with just a trace of moisture, according to National Weather Service records, other portions of the Valley saw more precipitation.

A site a mile north of Genoa, saw .36 inches of rain overnight, making the total for the week .6 inches.

• Turn right onto Leviathan Mine Rd, (On the right-hand side of the road near the water tower, (Inside Fenced Area)

• Holbrook Highlands, off of Highland Way- (A quarter mile down the road, turn right onto Alba Vista at the end of the cul-de-sac.)