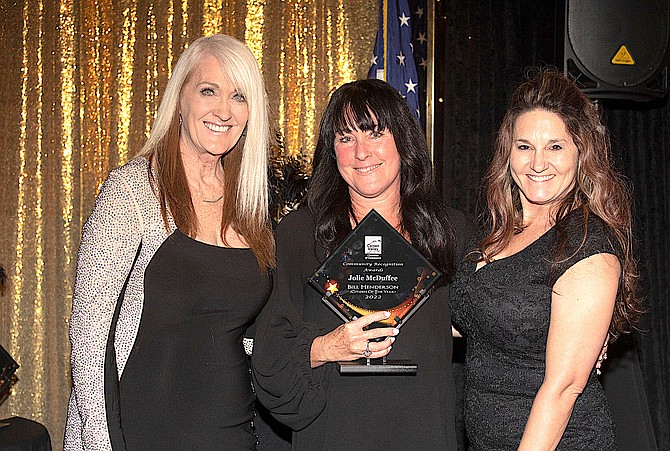 A 1988 graduate of Douglas High School, Jolie McDuffee has spent her life in Carson Valley helping one cause after another.

McDuffee was named the Bill Henderson Citizen of the Year by the Carson Valley Chamber of Commerce on Nov. 5.

“Jolie is seemingly everywhere in the community, working hard on one fundraising and awareness event after another,” according to the Chamber. “Whether it’s a benefit for breast cancer awareness, serious illness of local community members or the victims of the recent devastating wildfires, Jolie is right up front organizing events and seeking to help. Her endless energy and boundless enthusiasm are hallmarks of what makes the Carson Valley a special place.”

McDuffee was one of six honorees at the 2022 Community Recognition Awards at the Carson Valley Inn.

Presented by the Chamber and The Record-Courier, the ceremony has recognized more than 70 individuals, organizations and businesses over the past 15 years.

“Congratulations to the recipients, with so many hard working volunteers and members of community, it’s difficult every year to select just one,” Chamber Director Alicia Main said. “This year’s recipients join a long list of community members, organizations and businesses who have made the Carson Valley such a special place to live.”

Mark Smith Tire Center – Les Schwab was recognized as business of the year.

“This local business has been a staple of the Carson Valley for two generations starting in 1994,” organizers said. “Their wonderful and down home customer service makes them exactly the kind of small business keeping Carson Valley warm and personable. They invested in the community, sponsoring a weekly write-up in The Record-Courier on local athletes and actively supporting local youth sports programs.”

“She has been instrumental in leading the interior design efforts of the current expansion and the rehabilitation center expansion,” according to the Chamber. “Her level headedness and quiet determination inspires those around her, leading by example and hard work.”

Albert participates in many service clubs and serves on the boards of many nonprofits.

Carson Valley Arts Council was named the nonprofit of the year.

The Arts Council was formed in 2004 and has since become a hub for musical performances, artist showcases and gallery exhibits in the area. The Council is working to transform the Copeland Lumber building, which was recently named to the Register of Historic Places, into a theater and gallery.

Daphne Hillyer was named volunteer of the year for 2022 for her work with the Carson Valley Food Closet, Kiwanis Club of Carson Valley and the Aktion Club.

“Since moving here in 2001 to raise her five kids, Daphne has been a staple at many local events and programs, enjoying the comradery of the Carson Valley and serving the community.”

“This club always has a good time, with young active members of the community engaged in a variety of events,” chamber members said. “When it comes to assisting the community with donations of time and money they are very serious.”