Most Valley roadwork should be done this month 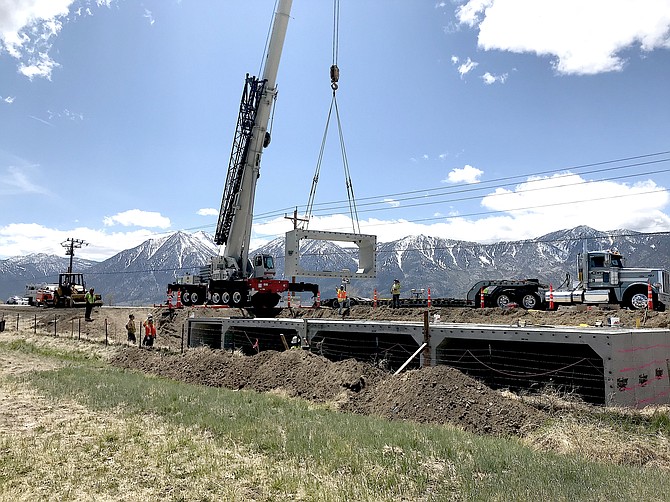 The last segment of the box culvert that will convey Cottonwood Slough under Highway 88 was installed last weekend. Jon Erb/Douglas County Photo

Much of the road work scheduled for Carson Valley will be completed in the coming month.

Highway 395 between Waterloo Lane and Riverview will be down to a single lane 8 a.m. to 4 p.m. Tuesday and Wednesday as the state conducts crack sealing.

Motorists traveling south of Gardnerville should expect minor delays, according to the Nevada Department of Transportation.

Work that required the closure of Highway 88 over subsequent weekends in April has been completed, but motorists will still see flaggers out through the middle of May.

The highway was closed while workers installed large box culverts to convey Cottonwood Slough under the highway without it backing up into Minden backyards.

When complete, the goal is to remove scores of Minden homes from the floodplain. The state did similar work on Highway 395 for Martin Slough three years ago.

Douglas County Transportation Engineer Jon Erb estimated work on Highway 88 will continue over the next three weeks that will require flaggers at the site just south of the County Road intersection.

“They are working on the channel and forming up the headwalls and wing walls to be poured,” he said.

Highway 395 between Waterloo Lane and Riverview will be down to a single lane 8 a.m. to 4 p.m. Tuesday and Wednesday as the state conducts cracksealing.

Work on Centerville Lane between Highway 88 and Foothill Road is expected to be finished next week.

Shoulder grading should be finished and then all that’s left are some of the details, including finishing the stripes, raising valve covers and installing signs.

Since the 2018 installation of the roundabout at Centerville and Highway 88, the route has become a more popular means for Gardnerville Ranchos residents to drive to Lake Tahoe.

However, issues with drainage along the many waterways the road crosses resulted in flooding from irrigation or rainstorms. Installation of new culverts along the route over the winter paved the way for the road’s resurfacing.

With the completion of the two county projects, the only major street closure remains Cemetery Lane in Gardnerville where work is under way. That project should be completed sometime this month.

The Nevada Department of Transportation has a few small projects in the works for Carson Valley, including chip sealing part of Muller Lane between Highway 395 and Foothill and a mill and fill on Highway 395 between Waterloo Lane and Douglas Avenue.