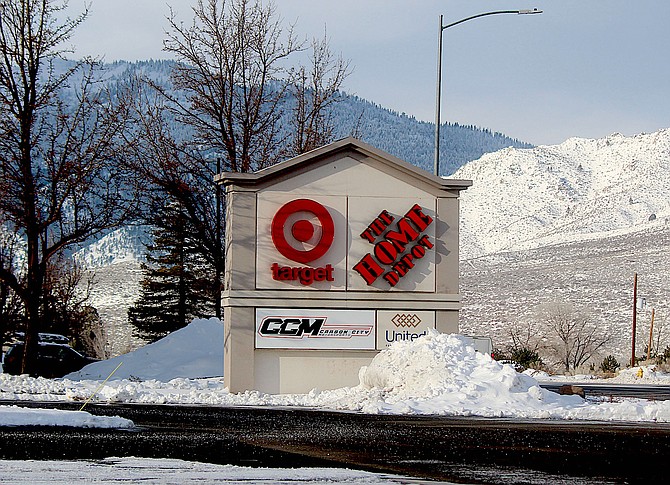 The shopping center at Jacks Valley Road and Highway 395. The Target and Home Depot opened in 2000.
Photo by Kurt Hildebrand.

Nevada’s birth month was good for Douglas County merchants who posted an 8 percent increase in taxable sales to open the fourth quarter of 2021.

According to figures released by the Nevada Department of Taxation, the county’s 5,283 filers brought in $81.97 million during October, up from $75.87 million the year before.

So far, taxable sales are up 2.5 percent for the fiscal year that started on July 1.

The increase is despite a 7.4 percent decrease in the county’s now second largest category, food services and drinking places, which brought in $9.2 million. That figure is tied to the Lake Tahoe casinos. The other two categories that typically reflect the state of Stateline, accommodations and amusement, gambling and recreation were both up significantly over October 2020.

General merchandise stores, which has taken over as the county’s largest sector, brought in $10.1 million, up 1.5 percent from October 2020. The revenue is generated by both Douglas Walmarts and the Target in addition to other stores. In Nevada, food is not subject to sales tax.

Virtual shopping continued to bring in a significant amount of sales tax, up 13 percent over last year to $18.19 million.

Building materials and garden equipment was up 10.4 percent over last year, reaching $6.6 million. The county’s motor vehicle and parts dealers were up 2.8 percent to $4.8 million.

The amount of revenue Douglas County receives from the state is guaranteed at a certain amount each month and isn’t affected by taxable sales.

Stateline casinos reported an increase of 6 percent — $1.9 million — to an $18.2 million total win. That ends the streak of two monthly decreases caused by the Caldor Fire.

But game and table win at Stateline was down 11 percent from last year but up 31.1 percent compared to November 2019.

The combined East Fork and Carson City townships reported an $11.2 million win, up 25.2 percent from last year and 27.5 percent from the year before that. The increase was almost entirely due to increased slot win.