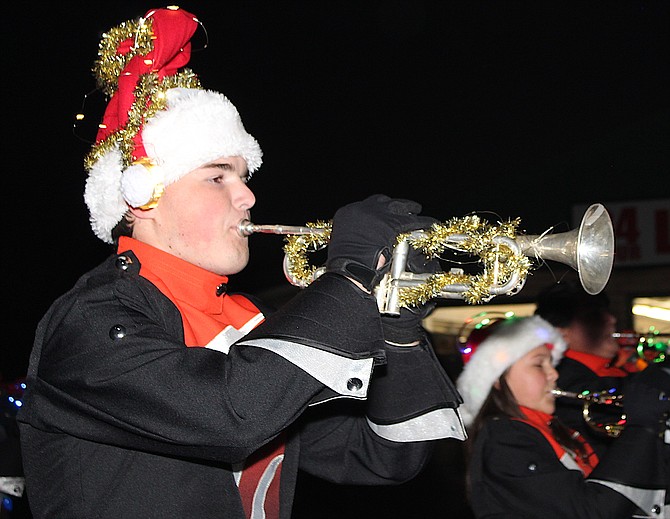 A member of the Douglas High School Marching Band brass section performs during the 2021 Parade of Lights in Gardnerville.

Three score and three entries will make the winding trip from Gardnerville to Minden tonight as the Parade of Lights celebrates the arrival of Christmas.

Led by the Douglas High Jr. ROTC Color Guard and the marching band, the 63 entries form up at Heritage Park before jogging north to Eddy Street and then turning onto Main Street at 5 p.m.

Highway 395 between Waterloo Lane and Buckeye Road will close at 4:30 p.m., according to the Douglas County Sheriff’s Office.

The forecast for the parade start is for 40 degrees but with in windy spots it will feel like it’s closer to freezing.

As the wind dies down, the temperature will actually warm to above freezing, though just barely. There’s a chance of rain along the parade route for the duration, so paradegoers should dress for chilly wet weather.

Hosted by the Carson Valley Chamber of Commerce, the annual parade has been part of Christmas celebrations since 1995.

“We know the weather can be unpredictable and the Sheriff’s Office will inform us the as soon as is practical if there are any safety concerns,” Chamber Executive Director Alicia Main said.

Entrants are expected to line up at Heritage Park after 3 p.m. today.

While there is only supposed to be one live Santa Claus at the parade, Project Santa Claus is collecting unwrapped toys at the judges stand, Main said.

Parade goers are asked to stay out of the road so as not to interfere with the entries and to hang onto their valuables.

There might be some residual ice from Thursday’s storm, so take it easy, whether walking or driving.

Douglas County Sheriff’s Search and Rescue and Citizens Patrol volunteers will be working the side road closures.

No vehicles except those in the parade will be permitted on the highway after it’s shut down.

Northbound motorists seeking to bypass the parade route during the highway closure can turn either way on Waterloo Lane. Those who turn north can take Orchard Road to Buckeye, while those turning south can take Waterloo to Centerville to the other half of Waterloo and onto Highway 88.

Southbound motorists on Highway 395 may take 88 south over to Waterloo and reverse the process or turn on Buckeye to Orchard.