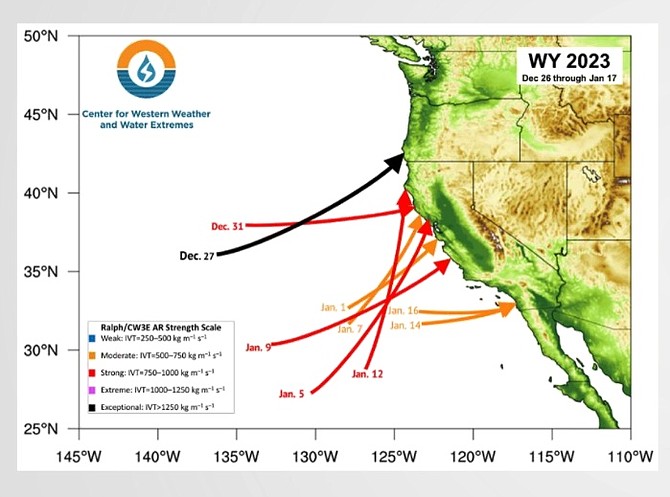 Was the string of atmospheric rivers that brought significant precipitation to Western Nevada the lottery or just an isolated jackpot?

At least five of the nine atmospheric rivers that struck the West Coast, including three strong and two moderate, directly affected weather in Western Nevada.

One strong flow on Dec. 31 that hit the northern coast of California, ended up spinning around Tonopah bringing the big New Year’s snowstorm that buried parts of eastern Carson Valley with upward of 30 inches of snow.

On Monday, forecasters and climatologists discussed the past month of storms that brought record rainfall to Minden.

The consensus among presenters at the California-Nevada Drought & Climate Outlook was that the parade of storms between Dec. 27 and Jan. 16 improved the water picture for 2023, but whether that makes a real difference depends on what happens next.

Of the nine atmospheric rivers, one that struck the southern Oregon coast was exceptional. Four were strong and four were moderate, including two that made landfall near San Diego.

Nevada Climatologist Steph McAfee said people are asking her whether things are back to normal.

“From a broad-brush view, the snowpacks look great, so far through most of the state,” she said. “Even the upper Colorado Basin is in decent shape, though not as good as the Sierra and Great Basin.”

She said looking back at previous years when precipitation has been this far ahead early, they tend to end up a bit better than normal but that’s variable.

“Reno essentially made up that really long-term precipitation deficit,” she said. “From a drought perspective, things are clearly better than they were. Even one great winter won’t fix things entirely. Are we out of drought? In some ways we’re on a good path and in some ways we have some significant changes to make.”

“The seasonal forecast issued Nov. 17 showed the same pattern,” he said. “You see cold and wet to the north and dry to the south. That’s not a particularly useful description. But the 8-14-day forecast caught that wet weather. You can see a real bullseye.”

The difference is that the longer forecast looks at a spread of possibilities.

The current La Niña pattern tends to bring wetter weather to the Northwest and drier weather to the southwest. Western Nevada lies right between those two patterns, which makes long-range predictions difficult.

This year will see a transition to El Niño conditions starting in the spring and increasing into fall. That tends to increase precipitation further south.

Coming off the driest three-year stretch observed since 1896, forecasters believed the current water year would also be dry.

That clearly didn’t happen with most the central Sierra well above 150 percent for the time of year and the snowpack twice normal and fully equal to April 1 totals for the year.

“It’s too soon to tell the impact on the ongoing drought,” said Scripps Institution of Oceanography Climate Scientist Julie Kalansky. “We could very easily slip back into drought.”