First six months of 2022 in Minden driest on record 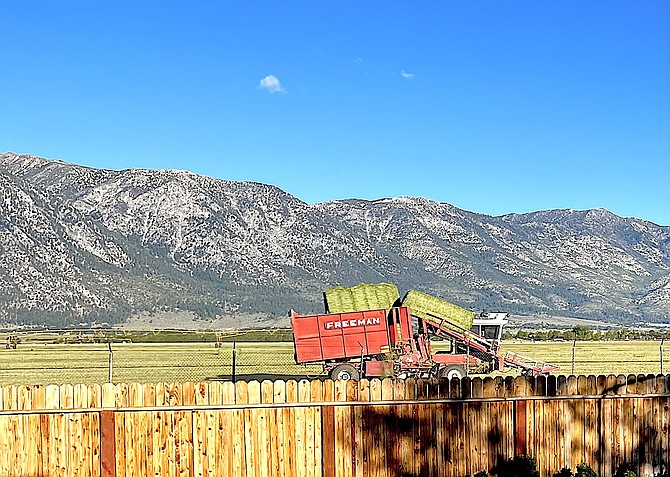 Hay bales are loaded up on July Fourth.
Michael Smith | Special to The R-C

As the last patches of snow melt from Jobs Peak, Carson Valley is the middle of a historic dry spell.

The first half of 2022 was the second driest in Minden on record and the driest six months in 37 years, according to National Weather Service records.

Only .76 inches of moisture have been recorded in the county seat, where records have been kept since 1906.

With an average of .72 inches of precipitation for the last quarter of the water year, it’s likely Carson Valley will limp across the Sept. 30 with continued extremely dry conditions.

The driest calendar year on record in Minden was 1928 when 2.8 inches fell between January and December.

Total precipitation for the water year remains at 92 percent in the Carson River Basin, thanks entirely to October and December. But once 2021 was over, so were the storms that brought moisture.

May 9 was the last date when measurable rain was recorded in Minden, and that was just .02 inches.

According to the U.S. Drought Monitor, Western Nevada is in severe drought conditions.

Even the air is drier, according to a new study that shows evaporative demand has increased across the West over the past 40 years.

While the largest increases have been centered around the Rio Grande and lower Colorado rivers, a band of drier atmosphere extends across the Great Basin into Western Nevada.

The study was published in the “Journal of Hydrometeorology” by a team from the Desert Research Institute, UC Merced and the Scripps Institute of Oceanography at UC San Diego.

“This means that atmospheric thirst conditions in parts of the country are now verging outside of the range that was experienced 20-40 years ago, especially in some regions of the Southwest,” according to lead author Dr. Christine Albano of the Institute. “This is really important to understand because we know that atmospheric thirst is a persistent force in pushing Western landscapes and water supplies toward drought.”

Warmer temperatures are responsible for 57 percent of the change, since warm air soaks up more moisture.

“These higher evaporative demands mean that, for every drop of precipitation that falls, less water is likely to drain into streams, wetlands and aquifers across the region,” the study concludes. “Soils and vegetation spend more time in drier conditions, increasing potential for forest fire, tree mortality and tree regeneration failure.”