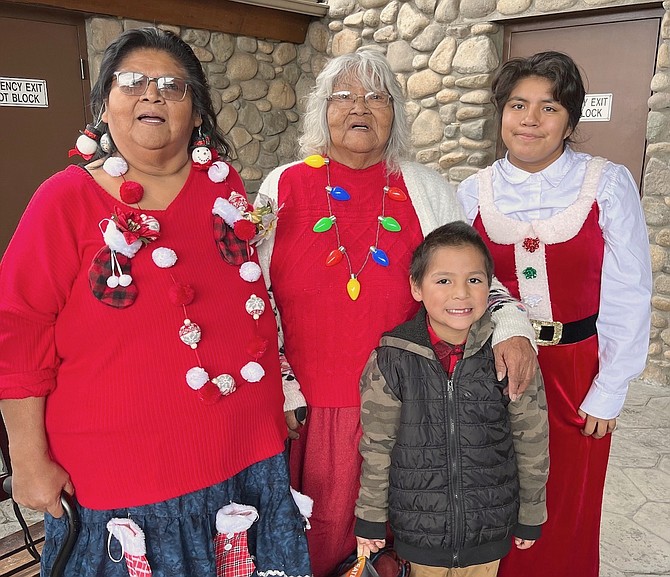 Karen Lundy, Dinah Pete and grandchildren all of Woodfords at the Washoe Tribe Christmas Party at the Carson Valley Inn on Dec. 22. Photo special to The R-C by Meg McDonald

The Washoe Tribe celebrated its elders at its annual Christmas party on Dec. 22.

The elders are key to the preservation of the tribe’s culture, history and language.

The party was conducted at the Carson Valley Inn in Minden.

The Washoe are the original inhabitants of the region surrounding Lake Tahoe.

Before the arrival of Europeans, there were roughly 3,000 tribal members regularly migrated between the Lake and lower elevations with the seasons, taking advantage of the variety of food and materials they used to survive.

According to the tribe’s official history, winter camps of 4 to ten families would live in separate winter houses and would move together.

These groups would at times have an informal leader or elder, who “was usually known for his or her wisdom and truthfulness.”

That person might have special power to perceive when there would be a significant source of rabbits or antelope and would become the rabbit or antelope boss to coordinate communal hunts.

According to the Tribe’s website at washoetribe.us, its language is a distinct branch of the Hokan Language Family that was honed by the tribe’s isolation in what is now the Sierra and Western Nevada.