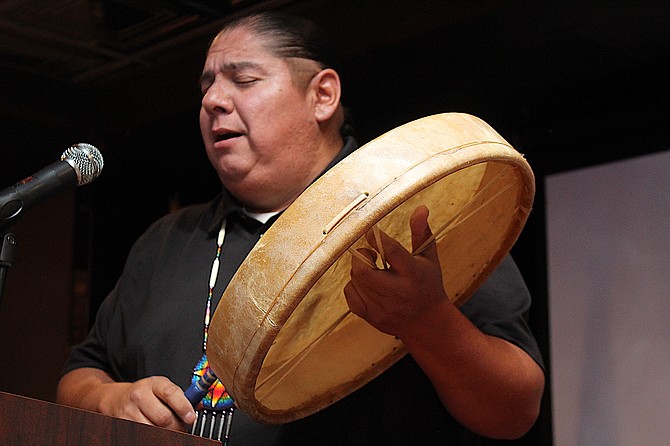 Martin Montgomery performs the “Flag Song” in Washoe at the Tribe's annual Veterans Day brunch at the Carson Valley Inn in Minden.
Photo by Kurt Hildebrand.

Washoe veterans were honored with a brunch hosted by the Washoe Tribe of Nevada and California on Thursday morning.

The first two Douglas County men called up in the draft to fight in the First World War were both Washoe.

Joe Mack and George Dutchy were at the top of the list, despite not being considered United States citizens.

I want to thank everyone who worked on this event to honor our veterans, and I’m honored to be here,” Montgomery said.

“I’d like to thank the veterans for what they have been through,” Marshal said before starting the pledge.

The Tribe’s Culture-Language Resources Department is teaming up with the Douglas County Public Library to share the history and culture of Carson Valley and Lake Tahoe’s original inhabitants.