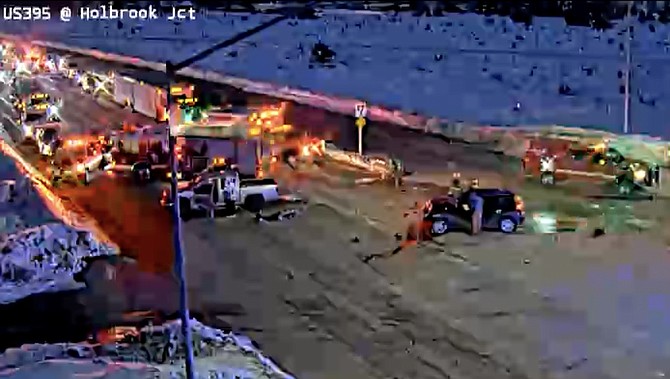 Traffic camera footage of a collision at Holbrook Junction on Friday.

Collisions on opposite corners of Douglas County have resulted in several injuries.

Emergency personnel responded to a collision at Highway 50 and Golf Course Drive in which a vehicle rolled over and caught fire at 5:07 p.m., according to Douglas dispatchers.

Within a half-dozen minutes there was a head-on collision in Holbrook Junction with two people suffering moderate injuries and two with less severe injuries, according to firefighters on scene. The most seriously injured were transported for treatment.

East Fork and Mono County medics and emergency personnel responded to the collision at the intersections of highways 395 and 208.

Tahoe-Douglas and Carson City firefighters responded to the collision at Golf Course Drive.

The Nevada State Police responded to both collisions.

It was the second collision in just over an hour along Highway 50 on Spooner Grade.

Both that collision and one at Kingsbury and Tramway Drive around lunchtime were vehicles into snowbanks.

Despite extremely cold conditions, that saw pogonip crystals take flight in parts of the Valley on Friday morning, there wasn’t a repeat of Thursday morning’s spinouts on Highway 88.