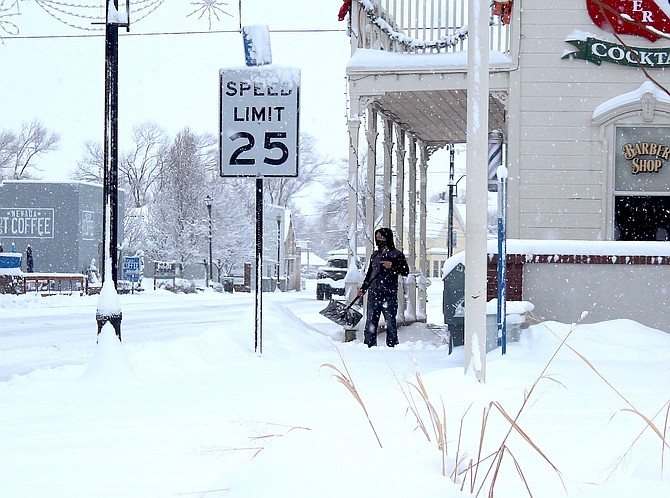 A shoveler clears the walk in front of JT Basque Bar & Dining Room on Monday morning.
Photo by Kurt Hildebrand.

Less than a third into winter, heavy snowfall over the past month has residents taking up snow shovels and blowers to clear paths and driveways across Carson Valley.

“We came from Bridgeport and are used to it, but it broke my heart how hard it was on so many,” said Misti Sullivan. “We helped dig out lots of neighbors and clean up broken (tree) limbs.”

Sullivan suggested clearing snow before walking or driving on it.

“Once you compress it, it’s harder to move and compacts down to the concrete,” she said.

Another resident advised to not wait for the storm to stop, but to clear as it falls.

“Shovel the day it falls, if you can,” said Topaz Ranch Estates resident Shelly Gonzalez. “The next day it will be hard and much more difficult to remove.”

The more snow that falls, the heavier it gets and the greater possibility that snow will stick to the ground. Instead of waiting for the storm to pass, make frequent trips around your home’s high traffic area, such as front steps, major walkways and driveway to get a head start on snow removal. It is also best to lay salt and de-icing products before the snow begins to fall.

If you do have to wait until the next day, remove snow as soon as possible.

“First thing after any snow fall, I’ll always clear the walkways and driveways first thing in the morning to stop it from getting hard and creating ice,” said Jess Downing. “Clear the first few inches, then do it again as more falls.”

It is advised to shovel from one side of the driveway to the other in a straight line motion.

Douglas County Code prohibits shoveling snow into the street because of drainage issues; instead shovel snow onto your lawn where it can water the grass once it melts.

Some residents suggest placing a plastic tarp or drop cloths on high traffic areas around your home before it snows, such as walkways from the front door to the car, the driveway near your car and porch steps.

“I saw a video of someone do this and they simply picked up the tarp and moved the snow off the porch and dumped it on their lawn,” said a resident in a Minden/Gardnerville Facebook post.

If you must drive, remember to thoroughly clear of your vehicle before driving away.

“If your car door locks freeze and won’t open or if your car door latch won’t close because it froze, put alcohol in spray bottle and stream in where you need it,” said Topaz Estates resident Teresa DeJournette. “Made this mistake years ago of trying to slam my car door shut to get the latch to engage on a snowy frozen day.”

Another resident suggested using a rubber broom to clear snow off vehicles before it compacts and turns to ice. She said the rubber broom makes snow easier to clear off and doesn’t cause any damage to the vehicle.

When driving, the Nevada Department of Transportation advise to only travel, when necessary, check weather and road conditions before driving, plan the best route to avoid snowy/icy and steep hills, give yourself plenty of time to safely reach your destination and share your travel itinerary so others know when to expect you.

Other things to remember when driving

Remove snow and ice from all the vehicle windows, mirrors, lights, turn signals, license plates and the roof.

Turn on headlights to see and be seen.

Keep additional distance between vehicles and do not pass without good distance and sight clearance.

Remember to watch weather warnings and prepare in advance; stock up on groceries and essentials to avoid having to go out during a storm.

More suggestions can be found in the forums on Facebook in Minden/Gardnerville/Carson Community forum and the Topaz Ranch Estates Community Forum and many of the residents will lend a hand or shovel to those who need help.

“This is a great community,” said Topaz Ranch Estates resident Suzanne Gauvin Buswell. “The people here are so amazing at helping each other. They will help you without being asked if they see you need assistance.”