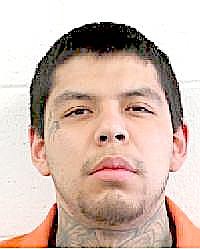 A Carson City man who made regional news for kidnapping his girlfriend admitted to possession of a firearm by a prohibited person in Douglas County District Court on Tuesday.

Logan Solo O’Daye, 24, appeared in court with an escort from the Northern Nevada Correctional Center, where he’s serving a 6-25-year prison sentence in connection with the Feb. 5, 2020, kidnapping.

He faces an additional 28-72 months on the charge, though prosecutors have agreed to recommend he serve the sentence at the same time as his current prison sentence. As part of his agreement, he will forfeit a 9 mm Berretta. He is scheduled to be sentenced Nov. 22.

O’Daye was convicted of the kidnapping in 2020 in Carson City.

He placed a gun up to his ex-girlfriend’s head and forced her to withdraw $200 from an ATM machine in the capital. O’Daye was also accused of shooting a man on the Carson Colony.

• A California man, who was drunk when he caused a Feb. 7 collision on Kingsbury Grade, wasn’t tested within the two hours required by law.

Prosecutor Patrick Ferguson said that if not for the timing of the blood tests taken in the case, Mack would have faced a mandatory prison term.

The victims indicated in a letter that they’d forgiven Mack, which Ferguson said was very gracious.

“I’m deeply disturbed by my actions that day,” Mack said. “It was a horrible, horrible decision. I shouldn’t have consumed any alcohol at all.”

Mack was sentenced for driving under the influence in East Fork Justice Court on Wednesday.

According to court documents Mack, was driving east on Kingsbury Grade attempting to pass other vehicles by crossing the double yellow line, which are considered no passing zones. Mack collided with a vehicle going westbound.

The highway was blocked for hours.

• A man admitted he should have realized that a real firefighter wouldn’t be riding around doing drugs with him on Tuesday.

Sanemeterio is also required to pay $3,628.12 in restitution

Much of the restitution comes from breaking into an Indian Hills cluster box.

• A Thai arrested in an underage sex ring has left the country and his attorney said he doesn’t intend on coming back.

Chonlagum Satarattiwong, 22, lost his visa, according to attorney Marty Hart.

He was scheduled to appear for arraignment in Douglas County District Court on Tuesday, but wasn’t in the country, Hart said.

District Judge Tod Young gave him until Oct. 4 to confirm he was going to be in Minden for an Oct. 11 hearing before he issues a bench warrant for his arrest.

He was caught up in the July 7 sting conducted by a task force at Stateline.

• A Lake Tahoe woman admitted to selling around two ounces of methamphetamine at Stateline for $480.

Marissa Catherine Walls, 27, agreed to plead guilty to a charge of sales of a controlled substance in exchange for not being prosecuted for being a habitual offender or a more serious drug charge.

A California woman admitted a count of fraudulent use of a credit card on Tuesday.

Kody Shyan Whitehead, 34, admitted to using someone else’s credit card to buy $171 in merchandise from the Stateline CVS on Aug. 10, 2021.

Whitehead faces 1-4 years in prison and a $5,000 fine. She said she was convicted of a felony in Amador County for a similar case.

She is scheduled to be sentenced on Nov. 22.