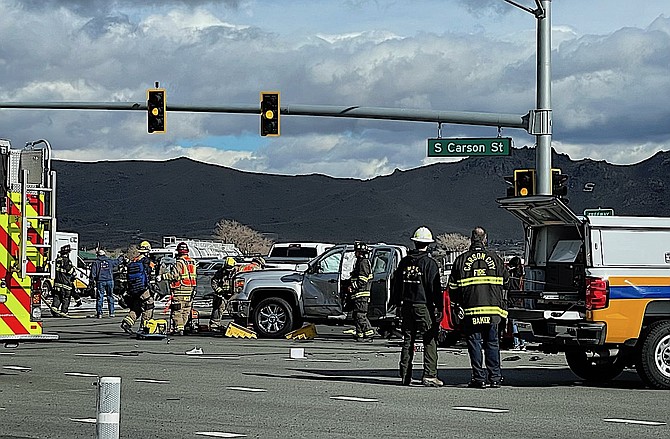 The traffic camera above Spooner Junction shows that motorists are moving through the intersection of Highway 395 and Interstate 580 as of 5:30 p.m.

Traffic is bumper to bumper on Highway 395 but it is flowing in both directions.

The Nevada Department of Transportation lifted the closure at about 5:35 p.m. Expect traffic to remain slow through the area after it was closed for more than four hours today by a collision that claimed two lives and critically injured three others.

Previous story: As of 4:30 p.m. a second fatality has been reported in the collision at the intersection of Highway 395 and Interstate 580 in southern Carson City, which remains partially closed due to a fatal collision.

At last report, one person was confirmed dead and four were in critical condition. Three of those were transported by helicopter for treatment.

Residents have reported significant traffic congestion due to the collision.

A fatal vehicle collision is being reported at Interstate 580 and Highway 395 just north of the Douglas County line.

The collision occurred at around 12:45 p.m. and was reported to have involved six vehicles.

The Nevada Highway Patrol is warning motorists the intersection could be closed for hours.

Carson City and East Fork medics responded to the collision and called for three helicopters to help transport the injured.

The collision involved a fire and fuel spill.

The Nevada Department of Transportation is reporting the intersection is closed and could be for hours.

The intersection is a bottleneck for commuters between Carson and Minden.