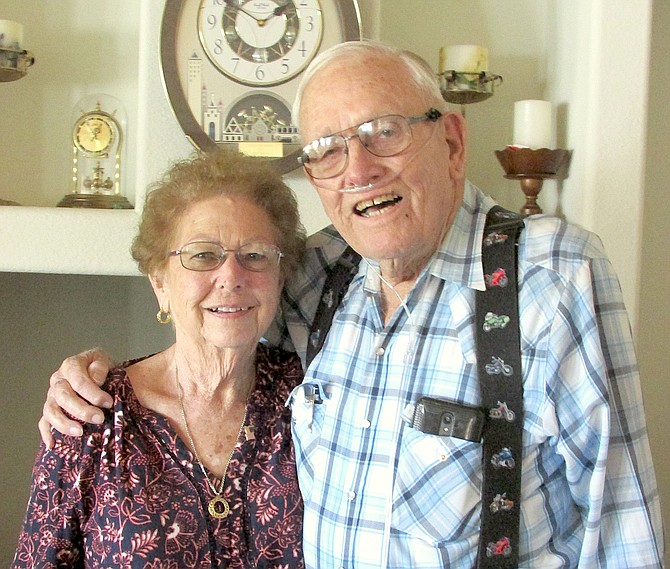 The sky was always the limit for 92-year-old Gardnerville resident USAF Lt. Col. Frank Murray, whose life ambition was to fly.

“I’m not satisfied being on the ground, I like to be up in the air,” he said.

Celebrating his 92nd birthday today he reminisces on a life well spent, a lot of which took place in an aircraft.

“I figure myself to be the luckiest man in the world because I got to do what I wanted to do,” said Murray. “My life ambition was fulfilled.”

Murray said his desire to fly ignited from his older brothers who both served in the U. S. Air Force.

“My big brother was a pilot, mostly commercial aircraft, and he would take me flying and taught me a lot about aviation,” said Murray. “So, I always wanted to do what my brother did and fly, except I got to go faster and higher than him.”

“It’s like the sports style Blackbird; that’s what I call it,” he said. “The USAF SR-71 version was a Station Wagon compared to it.”

But his career as an American aviator went beyond flying fast “sports” aircraft.

He followed in his brother Bill Murray’s footsteps and enlisted in the Air Force, right out of high school at 17-years-old.

His career started when he was selected for and attended airplane and mechanics school at Keesler Airforce base. He advanced through the ranks in four years, becoming sergeant. He was accepted into the Aviation Cadet Flying Training Program and was commissioned a second lieutenant.

“I joined the Air Force because that was the closest way to get to be able to fly and I was determined to do it one way or another, and by golly I got to,” said Murray. “I ended up with the thrill of my life. “

His first operational fighter assignment was to Chaumont, France, while flying the F-84G and F-86F. He was later reassigned to Bergstrom Air Force Base in Texas, where he experienced his first supersonic speeds in a F-101A/C. His final assignment prior to becoming an A-12 pilot was a three-year tour as an A-12 safety chase pilot in direct support of Project Oxcart in the 1129th Special Activities Squadron at Area 51.

“I took advantage of a program and things started working for me,” said Murray. “In a nutshell I practiced what was preached.”

From there he transitioned to the CIA where he flew four operational missions, most notably the second North Korean mission on Feb. 19, 1968.

“I had no idea it was coming,” he said, “but I enjoyed it for a few years, and I got to work for my country in a different way, which I enjoyed very much.”

As result, he became one of the founding members and the historian for the Road Runners, made up of the group responsible for the A-12 and U-2 programs for the CIA.

The Oxcart program was officially shut down in June 1968 and Murray returned to the Air Force. He was assigned to the 475th Test Squadron at Tyndall Airforce Base and volunteered for duty in Southeast Asia with the 1st Special Operations Squadron at Nakhon Phanom Air Base in Thailand and flew 67 combat Search and Rescue missions over Laos and Vietnam, eventually becoming its Unit Commander.

“The most rewarding thing as an aviator was the search and rescue, I did in Vietnam,” said Murray. “All you have to do is look one man in the face after you have rescued him and know what you just did. ‘That others may live’ was our motto.”

During near 30 years of service in the Air Force, Murray flew 67 combat missions and accumulated 6,000 hours of flying military aircraft and another 1,000 hours flying civilian planes. He received the CIA’s Intelligence Star for Valor and was inducted into Nevada’s Aviation Hall of Fame in 2012.

“I have had a thrilling career and now I live in Gardnerville and I am not doing much more than trying to stay happy,” said Murray.

Some of his hobbies now include talking on his Collins Radio with “The Do-Nothing Net.”

“We call ourselves the ‘Do Nothing Net’ because if you ask any of the guys on the network what they did today it’s always ‘nothing,’” said Murray. “We just talk to each other and fool around, really.”

He’s written several articles and books about his life and military experience, including “Once Upon a Time: At Area 51,” which can be found on Amazon.com

He has also rebuilt British motorcycles and spends most of his time now with wife, Jolene.

“I would not be here if not for her,” said Murray. “Maybe she’s the secret to me reaching this age.”

Murray and Jolene live in Ruhenstroth and they will be celebrating their third wedding anniversary along with Murray’s birthday today with family and friends.

“Life is short, but it’s what you make of it,” said Murray. “I’ve had an exciting life and the most rewarding things in my life happened because I went after them.”