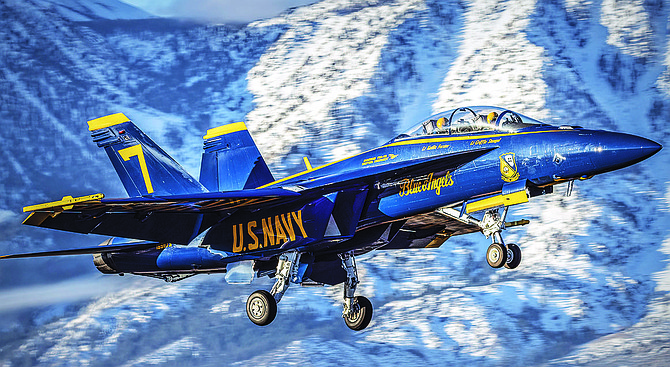 An F/A-18 Hornet takes off from Minden-Tahoe Airport after a Blue Angels scouting trip in January.
J.T. Humphrey | Special to The R-C

It takes a lot of volunteers to get an airshow off the ground, and the Aviation Roundup scheduled for Oct. 1-2 is no exception.

They are still looking for volunteers, sponsors and vendors to become a part of the show where the Blue Angels will be performing.

“This is going to be a great show, exciting show,” Johnson said. “The Blues are now flying Super Hornets which is really going to really add to the show.”

Johnson said that his biggest role in airshows is dealing with the Federal Aviation Association, and he works to get a certificate of waiver to be able to “break the rules” that apply to routine aviation.

He works to “mitigate risk for all in attendance.”

“In air shows, we like to break those rules, because how boring would it be if airplanes were just flying around in a pattern and landing. To make it exciting, we have to break the rules,” said Johnson.

The biggest obstacle to the shows is cost.

They have multiple costs that go into an airshow including rental cars, hotels, insurance, emergency services, gas and everything that goes into producing the grounds for the attendees of the airshow.

“Volunteers are the lifeblood of airshows. That’s what makes it work,” said Johnson.

Thompson offered an inside scoop on a few things taking place at Aviation Roundup this year and talked about a perk of being a sponsor.

“We have two of the most award-winning announcers in the business this year,” she said. “As a sponsor you get to provide text for them to read and promote whatever you want to promote. That is definitely an advantage of the sponsors as well.”

This year at Aviation Roundup there will be nine different acts in addition to the Blue Angels. Stein, The Chuters, Greg Koontz and the Alabama Boys, Kirby Chambliss, Matt Younkin,

Mini Jet Airshow, Vertigo Airshows Super Salto Sailplane, Erickson Aircraft Collection and Dave Costa will all be preforming on both Saturday and Sunday with gates opening at 9 a.m.

Anyone looking to get tickets, become a sponsor, be a volunteer or get a vendor booth may go online at www.aviation
roundup.com.