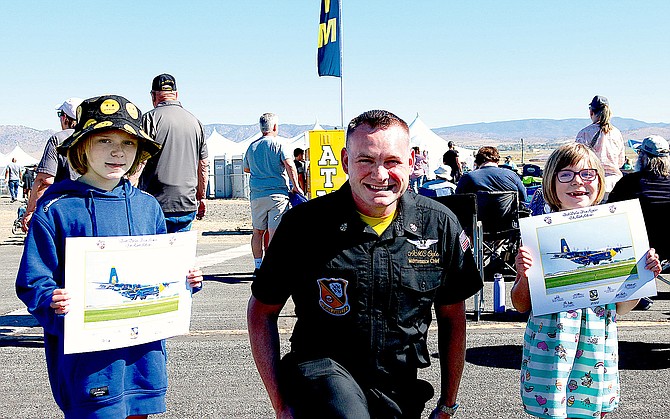 Navy Chief Gregory Ogle of the Blue Angels takes a picture with Eleanor, 6, and Emilia, 9, Terlizzi during the Aviation Roundup at the Minden-Tahoe Airport on Saturday.
Photo by Sarah Drinkwine.

Patriotism, community and a love for aviation was what brought thousands of people to Minden-Tahoe Airport’s two-day Aviation Roundup Saturday and Sunday.

“The Carson Valley people should feel privileged to live here, not only do they have the natural beauty, but it’s reflected in their personality as well,” said Carson City resident Jeanette Porter. “This community is so patriotic and what better way to pay tribute.”

Porter’s husband Ron served as a Navy corpsman on the aircraft carrier USS Kitty Hawk during the Vietnam war.

“We feel privileged to watch our military excellence and their aptitude of dedication and pride. It’s the least we can do, and you couldn’t ask for a perfect setting,” she said.

Many locals and travelers came out to not only watch the air show, but to come together as a community.

“The boys are really looking forward to seeing the planes and especially the Blue Angels,” said Nadarisay.

The Blue Angels may have been the highlight of the air performances, but visitors also enjoyed photos in a Top Gun F-18 replica, various food and merchandise vendors, aircraft displays, military representatives including Navy, Airforce, National Guard and the Marines.

Six-year-old Eleanor Terlizzi said her favorite part was the snacks and the airplanes.

“We come all the time to the Minden airshow,” said Truckee-Reno resident Heather Terlizzi. “They put on a great show and it’s always tons of fun.”

What brought people together over the weekend is part of the United States Navy Blue Angel and the Minden-Tahoe Airport’s missions which is to showcase teamwork, and professionalism through flight demonstrations, information and community outreach to inspire a connection between the community, military and aviation.

“We just want to give a huge shout out to the Airport staff, volunteers for all their hard work for making this event successful and all of the community coming out to celebrate this beautiful day,” said Minden-Tahoe Airport Director Bobbi Thompson.