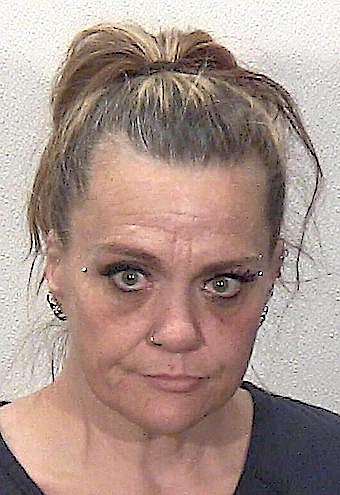 A Minden woman, who was drunk when she careened off cars and went onto the sidewalk in June, was sentenced Tuesday to 2-6 years in prison.

Ginnie Lorraine Heidt, 46, admitted to a charge of driving under the influence with a prior felony in August.

According to court documents, a deputy was conducting a traffic stop when he noticed Heidt’s vehicle pass him with a damaged tire heading north on Highway 395 around 1:20 p.m. June 6.

He cleared from the stop and travelled north when he saw the vehicle pulled over near Johnson Lane. He checked if there were any recent accident reports and was told several people reported a vehicle matching the one striking several others at Highway 88 and 395. During the stop, two witnesses to Heidt’s driving pulled up and offered statements, including that she ran the red light.

A preliminary breath test revealed she had a .137 blood alcohol content.

In a statement, she said she was coming home from a visit in Coleville and was feeling dizzy.

After getting gas at the Topaz Lodge she said she drank a small bottle of Fireball whiskey.

She said she passed Holbrook Junction and that her next memory was the deputy next to her.

Heidt was convicted of felony DUI in May 2017 in Carson City and sentenced to 18-72 months, according to Nevada Department of Corrections records. She was paroled in April 2019.

She was given credit for 98 days time served.

Sarah Drinkwine contributed to this story.