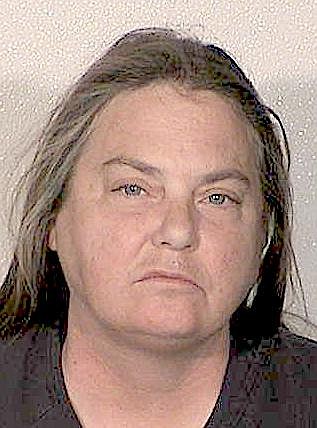 A Gardnerville woman expressed consternation at the 4-10-year prison sentence she received on a subsequent felony instance of drunken driving.

Leslie Diane Meier, 51, pointed out that earlier Tuesday, a Reno man was facing six years under a conditional plea agreement for felony DUI with death.

“How do I get 10 years when the guy who was sitting right here gets six and he killed somebody?” she asked attorney Justin Clouser after District Judge Tod Young pronounced her sentence.

Meier faced 2-15 years in prison, but prosecutors agreed to recommend capping her sentence at 10 years when she pleaded guilty in August.

This will be Meier’s second trip to prison, where she was sentenced to 18-60 months in March 2019. She had been on diversion for two weeks when she appeared in court with a .152 blood alcohol content.

Meier’s last parole hearing was August 2020 when she was released from prison.

On June 2, 2021, deputies received a report that she was drinking and driving near the entrance to the Gardnerville Ranchos.

When she was pulled over, she had a bottle of peach schnapps and a .25 blood alcohol content.

“There’s no getting around the fact that she is an alcoholic,” Clouser said.

Meier told Young she shared a cell with a woman who killed someone while drunk.

Deputies could not confirm that Joan Kathryn Wenger and Meier were in a cell together before Wenger was sentenced to prison in October. Meier did not specify that it was Wenger, but the two were in custody for much of the same time.

“Every night she would say it wasn’t her fault,” Meier said. “I didn’t realize how many people it affected until I was sitting in a cell with the woman. I never want to hurt anyone again.”

In pronouncing sentence, Young pointed out Meier had been to several victim impact panels.

In her question to her attorney, Meier was referring to the case against Alexander Gutierrez Gonzales, 25, who admitted to a count of driving under the influence causing death in a Nov. 3 head-on collision.

Under an agreement with prosecutors, Gutierrez Gonzales’ prison sentence would be limited to 28-72 months.

However, Young said he wasn’t committing to the deal and could decide to sentence Gutierrez Gonzales to up to 20 years in prison and a $2,000-$5,000 fine March 1.

Should Young issue a harsher sentence, then Gutierrez Gonzales could withdraw his plea and require a trial.

Prosecutor Patrick Ferguson said the father of Peter Dykeman Jr., who was killed in the collision, will either write a victim impact statement or talk at the sentencing.

Ferguson said Dykeman’s relatives were aware of the plea negotiation.