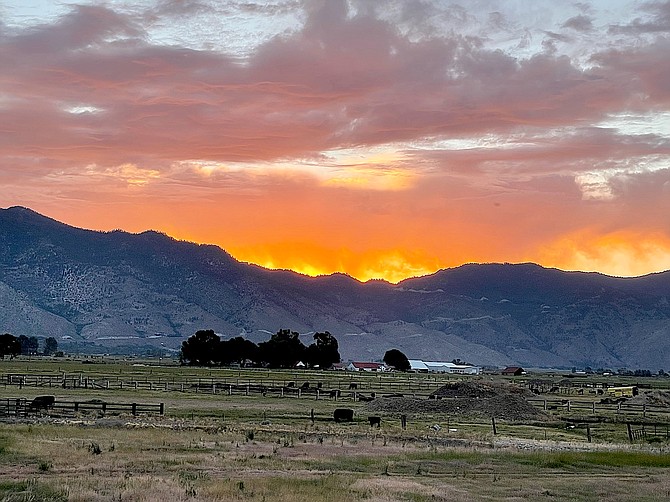 Dust in the atmosphere may have contributed to Monday evening's colorful sunset.
Gary Dove | Special to The R-C

Genoa, Nev. — The Genoa Cemetery Fire on Friday was caused by construction equipment, according to East Fork Fire Marshal Amy Ray. It very nearly qualifies as the second construction related fire in a month. Construction workers cutting metal culvert set a May 16 fire behind the Judicial & Law Enforcement Building.

Friday was the first fire involving evacuations of the season. Last year’s first big fire was the much, much larger June 9 Jacks Valley fire, so we’re running behind on the calendar.

Ballot counting is still underway in Minden with Monday the last day to cure signatures on paper ballots. I feel confident enough in the results to publish a table of them on Wednesday, but results may vary right up to the time commissioners canvass the vote on Friday.

The consensus is that the light haze hovering around Carson Valley on Monday morning was dust from the breezy weekend over the deserts. It’s been so dry for so long that the fine dust off the playas just hovers for days.

We broke a record for coolest high temperature on Sunday with 61 degrees, just two days before summer begins today. I’m not very hopeful for my tomatoes this season. I should have left them inside.

National Weather Service forecasters in Reno think we could see some monsoonal action this week starting Wednesday. That means an increased chance of thunderstorms through the weekend with the brunt on Wednesday and Thursday.

It’s going to heat up today with the high temperature hitting 85 degrees under mostly sunny skies. The wind will be out of the southeast at 5-10 mph shifting north before lunchtime.