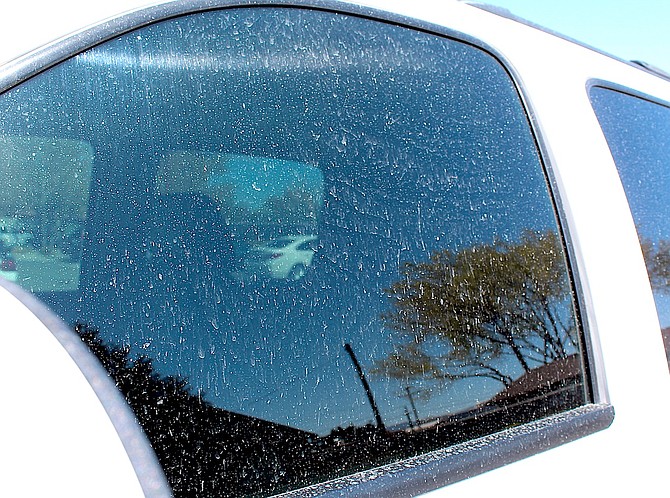 Fine lines of dust cover a truck window in Gardnerville on Thursday morning.

Business has been booming at Carson Valley car washes this week after a late-night drizzle combined with dust left a layer on residents’ vehicles.

The airport also reported haze, which might have come from blowing dust.

National Weather Service Meteorologist Chris Smallcomb said the combination of light showers and northeasterly winds may have left the almost ash like substance on outdoor surfaces.

“That may have been enough to pick up some playa dust from the Black Rock or Carson Sink north of Fallon and mix it in with the rain.”

Prevailing winds over Carson Valley tend to be from the southwest, blowing over the Sierra.

While that’s bad news during fire season when it often delivers smoke from forest fires, during most of the rest of the year it’s relatively free of particulate matter.

However, those who’ve lived downwind from deserts are familiar with the fine coating.

“When I lived in Salt Lake for a brief period, my car would honestly get dirtier when it rained for this very reason,” Smallcomb said. “Dust from the Utah deserts was blown in and mixed with the rain.”

With precipitation around 30-50 percent of average for 30 days, and the snowpack rapidly melting, irrigation season is likely to be shortened.

Douglas County has been added to a list of Nevada counties declared natural disaster areas due to drought.

The weekend’s moderate sgtorm could bring snow to the mountains and rain to Carson Valley, which will help slow down drought conditions’ spread across the county.

Long-range outlooks are trending toward warmer and drier conditions for Western Nevada through July.