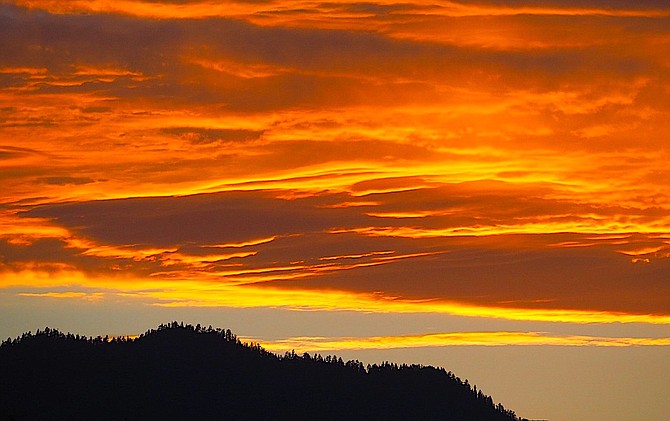 Dave Thomas caught the sunset on July 18 from the Gardnerville Ranchos.

Lots of other trails allow bikes

There has been an increasing number of bicycle tracks on the Jobs Peak Ranch trail, especially on the north side of the Valley View trail junction, primarily up to the ridge top where the sit bench is above that newer home.  So, if you are a new resident unfamiliar with the Carson Valley Trails Association rules, cannot read the signs, or are just plain ignorant, please reconsider.  No bicycles are allowed on that 2.5-mile trail section from Valley View to the Jobs Peak Ranch trailhead.  There are miles of association trails that are bike friendly, and we would appreciate if you took advantage of those and left the Jobs Peak Ranch trail to the hikers, runners, and dog walkers.  Thank you for taking the time to read this.

Muzzy is spot on

Lynn Muzzy’s recent letter to the editor compliments John Engels on his “community first” service on the Board of County Commissions as well as points out the fallacy of Mr. Zinke’s “grow-or-die” statement. Spot on on both accounts. Grow or die is illogical on its face. If that were true, every community would be doomed to a miserable, withering death once the developers have nothing vacant to build on. Examples of this litter SoCal. Those communities aren’t quite dead, you just wouldn’t want to live there. Not to worry about the developers, with padded pockets and phony platitudes, they’ll be headed for greener pastures.

Protect what we have.

The topic of Social and Emotional Learning has been at the forefront of the school board trustee race.

SEL presents a “good sell” as a helpful program aimed at enhancing the well-being of our youth. On the surface, it sounds beneficial and may be initially.

Yet, CASEL or Collaborative for Academic, Social, and Emotional Learning has described SEL “as a Lever for Equity and Social Justice.”

The seemingly innocuous words “equity” and “social justice” used in describing SEL are the centerpieces of the “woke” movement that SEL has become a part of. These words can be very appealing and attract good people to support the movement without understanding its true intent. Every reasonable person wants to fight injustice and racism.

Yet, the term “equity” has a vastly different meaning from the word equality. Equity means equal outcomes for all, not equal opportunities. Outcomes must be equal despite different levels of effort and other factors that the woke movement automatically deems “unfair.” The woke movement insists unequal outcomes (inequity), and “social injustice” result from only one thing – oppression (re race, sexual identity, or some other “marginalization”).

The roots of the woke movement can be traced to the Utopian ideals Karl Marx embraced. He viewed the world as a struggle between the Proletariat and the Ruling Class – oppressed and oppressors – that would and should lead to revolution and the overthrow of the existing system.

This call for dividing into oppressed and oppressor is evident in the “cancel” culture’s attempt to censor dialogue and conversation and also to weaken or “cancel” men by deeming masculinity as “toxic.” To sabotage the nuclear family is also essential because it undergirds capitalism. Attacking these targets is all part of woke ideology.

Commonly, a person is viewed as a creation of a loving God, made in His “image and likeness.” Contrarily, in woke terms, a person is defined by “the hatred of society” and “through the lens of power and domination,” says author Noel Mering.

No one will deny that we are born under varying conditions, talents, and opportunities. Yet, many have approached this challenge with a positive attitude and improved their lives. Sadly, woke ideology promotes disruption not principles that bring balance, harmony, and success to people’s lives.

Inflation is a world-wide issue which is principally a result of ours and world’s economies severely disrupted by the Covid pandemic. The re-opening of ours and the world’s economies has not been smooth. Republicans blame Biden and Democrats for inflation but don’t offer any policies they would put in place to address it. Why, because they don’t have a plan to address it because they know that until our supply/demand issues are resolved we will have inflation. Putin’s invasion of Ukraine and China’s continuing lockdowns has also negatively impacted our economic recovery. The claim that Biden made a mess of Ukraine doesn’t fit the facts. Biden pulled NATO and our allies together to fight Putin’s aggression. Biden didn’t call Putin a genius for invading Ukraine like Trump did. The major issue with our schools is school safety, something Republicans refuse to address. Their belief is all we need is a good guy with a gun to thwart a bad guy with a gun. We had almost 400 good guys with guns in Uvalde facing one bad guy with a gun and that wasn’t enough. Our southern border is a mess but it was not a mess when Trump took office, illegal border crossings were at a 50 year low when Trump took office. The same cannot be said for when Biden took office, Biden is tasked with cleaning up Trump’s mess at the border.

Our justice system is a mess because we have right wing extremists controlling the Supreme Court who seem bent on undoing the 20th century. Trump ignored multiple court findings that concluded there was no evidence of fraud that would have overturned the 2020 election. Trump’s response was to lead an insurrection to try and remain in power. So, if we are a laughing stock around the world it is because we preach our belief in democracy but have a former president and members of his party who don’t believe in democracy. As Representative Liz Cheney stated, Republicans cannot be both loyal to Donald Trump and loyal to the Constitution. Laxalt has shown is loyalty to Trump by stating that if he loses his election, it will be because of fraud.

Trump and Republicans passed tax cut legislation which primarily benefited the wealthy and large corporations. We have billionaires and large corporations who pay no federal income taxes. We have a Republican senator (Rick Scott) heading the Republican Senate election campaign whose proposals include making lower income people pay federal income taxes regardless of income (would impact seniors and poor) and require all federal legislation to have a five-year sunset (this would impact Social Security and Medicare). This is a window into what Republicans have in mind when/if they take control of Congress. Republicans want to increase taxes on a large portion of Americans and at the same time eliminate Social Security and Medicare. If that is what you want for our country, then Laxalt is your man.