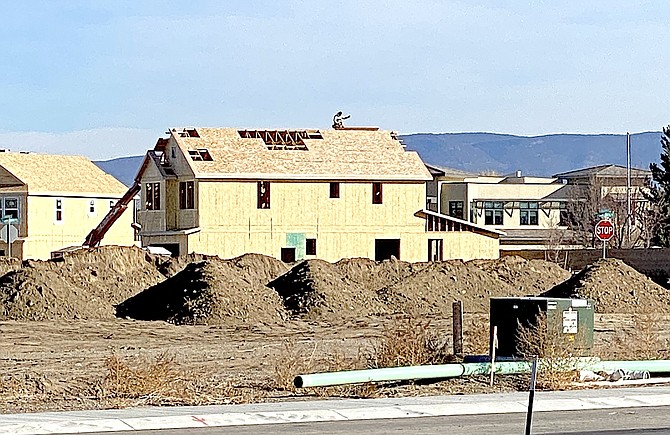 Construction in Minden. Photo special to The R-C by Robin Sarantos

Mary with child not yet espoused

Joseph wondering what is this about

Privately putting Mary away so not to be shamed

Instructed by God Mary he nonetheless had to claim

Because in a dream an angel came

That the long-awaited Messiah would soon be born

Emmanuel God with us would be his name

That he and Mary were chosen to raise the perfect man

He did exactly what he was led Micah 5:2 fulfilled as read

A heavenly star pointed the way

That little baby for all our futures God gave

Who could meekly say

Blessed are we for doing it God’s way

Reprinted with permission from “Biblical Myths and Lies Traditions of Men Exposed!”

Change comes in many forms. Just walk in a square mile area between Muller Lane and Santa Anita near the new McDonald’s on Highway 395 and up to the La Costa neighborhood vicinity. It is obvious that Minden is growing – expanding – bringing in new businesses, new families with their beloved doggies and kitties, new sidewalks, new landscapes…but at what price?

Coyotes can sporadically be seen running across the parcels of farmlands with their “For Sale” signs prominently displayed. These wild creatures are looking a bit skinnier now-a-days, and the neighborhood rumor has it that a bear’s been wandering in the region - - maybe even taking the paths through beautiful Jake’s Wetlands. Every now-and-then, a pile of scat is seen along the way, and it is obvious that it belongs to the bear. This past week, cutting through the parcel of land up for sale on the corner or Monte Vista and Ironwood, distinct deer footprints were obvious. And just last month, a deer appeared in the neighborhood munching on the newly planted grass in front of a recently built home. Accept this wildlife as part of the existing environment. Respect it. Give it leeway to co-exist.

Along Muller Lane, the cows that were numerous a couple of years ago seem to be disappearing – vanishing. Not a single sheep can be seen. Luckily, there are still majestic owls that perch on the roof tops and call back and forth with their mellowing hoots. And in summer the bats come out in search of their food supply. Hawks seem to enjoy perching on top of the light and electrical poles along Muller Lane, and progress – new area residences – doesn’t appear to bother them.

Just last week, there was an interesting and informative article in The Record-Courier explaining the expansion of Muller. More new construction will follow. Hopefully, an individual with business acuity will see the need for a large grocery store along one of the available lots adjacent to Highway 395. Many of the new residents buying in the extended neighborhood are retired. At some point, it will prove beneficial for them to be close to shopping for their daily provisions — preferably close enough where our revered senior citizens can bike or walk down to the grocery store in good weather to pick up a carton of milk or a few other items. New roads…new homes…new businesses…new people —  all who love and cherish this area. We need to continue striving to make it the best environment possible.

The 2002 Heavenly Holiday Faire was a huge success due to the sponsors, volunteers and shoppers.

It takes many people to make such a large event successful and function smoothly. We would like to thank the UWF members, CVUMC Volunteers, Crafters, Bakers & Candy Makers and the committee chairs.

Thanks also to Len Frueh, office manager and Pastor Tony Hoefner for their help and support.

Sometimes looking up can hurt

It’s Christmas season, and I’m betting a lot of people will be buying new big screen TVs for Christmas.  A word to the wise:

I practiced chiropractic for 38 years here in the Valley before retiring a year and a half ago.  During most of those years I specialized in treating neck problems.  One of the things I learned was that having your head and neck in an extended position (looking up) for a long period of time is almost guaranteed to cause neck pain.  I once treated a women who had 15 years of neck pain and headaches after watching an airshow.  With that in mind, how high you mount your TV is important.

I always advised people to sit where you normally sit to watch TV.  Close your eyes and put your head and neck in a comfortable, neutral position.  Open your eyes and look straight ahead.  That is approximately how high the center of your TV should be. With multiple people you have to take an average.

After I retired, my wife and I took a 12,000-mile road trip, staying with friends and relatives all over the country.  The number of people who had their TV mounted high on the wall – often over the fireplace – was astounding.  Like I said, that is eventually going to lead to neck pain, and possibly headaches, and you won’t understand why.

I was disappointed in the tone of “Commissioners defunding the Sheriff’s Office” (letter to the editor, Dec. 14 R-C). The letter asks “how . . . Douglas County elected officials allowed our public safety to become a crisis?” The letter goes on to say that “…it would appear the Douglas County commissioners are fighting an active war against public safety within Douglas County.” Seriously? Why would elected officials knowingly put their constituents – and their own families – in danger.

Let’s agree that law enforcement is a tough job and sometimes a dangerous one. Many of us remember Sergeant John Lenz, the cello playing officer who was shot in the face a couple of years ago responding to a crime in progress and was seriously wounded.

Now that Sam Bankman Fried has all but admitted to stealing billions of investors money in his crypto currency scheme and being the second largest contributor to the Democratic party, I’m wondering will we see our two Nevada senators return the money they received or have they already filtered the money to their families. I’m all ready hearing a few Democrat politicians saying they will donate some of the contributions to charity. So taking stolen money and donating to charity makes it Ok? How about returning it to the bankruptcy courts so it can be directed back to all the small investors that were fleeced by Mr fried and the Democratic Party.