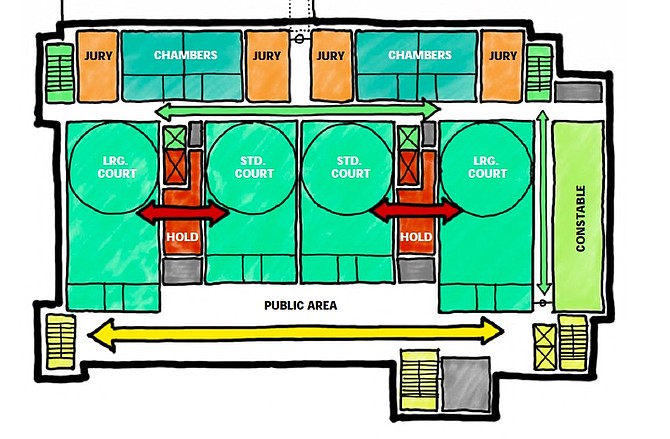 A sketch of the second floor of a proposed courthouse in Minden. TSK Architects

Plans to build a new courthouse include four courtrooms, indicating the possibility East Fork will add a second justice of the peace once there’s sufficient room.

County commissioners took a “virtual tour” of a new court facility on land the county purchased along Buckeye Road a few months ago.

TSK Architects Kevin Quan and Kevin Kenmer presented a rough proposal for the proposed $41.5 million courthouse at the Aug. 18 Douglas County Board of Commissioners meeting.

The Judicial & Law Enforcement Center located at Buckeye Road and Water Street in downtown Minden was built 40 years ago.

Designed to expand with the county, the 40,000-square-foot building has given Douglas County residents their money’s worth.

But rather than try to expand it, which County Manager Patrick Cates said would be more costly than building new, the county is proposing renovating the current building for the Sheriff’s Office and moving the courts to the new structure.

Preliminary drawings propose a two-story 75,000-square-foot courthouse, with 200 public parking spots, 40 spots for secure parking and another 20 spots for jurors.

Defendants in custody would be transported from the Sheriff’s Office to the courthouse and brought in through a below-grade sallyport.

Occupants of the present judicial center raised the need for an expanded facility in 2015. The jail had just undergone a $4 million renovation, but the space reserved for the courts hadn’t changed significantly in decades.

Under current conditions, accusers and accused are left to mingle with jurors and people in line to pay a traffic ticket. While booths were installed upstairs to allow attorneys to meet with defendants, judges have expressed concerns about security in the old building.

State law allowed East Fork to add another justice of the peace with the township exceeded 34,000 people in the early part of the century.

However, both justices of the peace Jim EnEarl and Tom Perkins declined the addition, mostly because there wasn’t a courtroom for a second justice of the peace to preside. There is a second justice court in Tahoe Township in Douglas County, where Richard Glasson presides. At one point when it seemed like East Fork would have to add a justice, county officials suggested combining the two townships.

However, in the meantime, the Nevada Legislature changed the threshold for a second justice of the peace to 50,000 residents, Cates said.

According to the Nevada Demographer’s Office that’s more people than live in the entire county, though just barely.

Funding $40 million would require debt financing with a potential interest rate of 4.35 percent, with an interest of $17.3 million over the 15-year term. Those figures would depend on conditions when the loan was actually sought.

County commissioners approved spending $5 million to purchase 57 acres of Park Ranch Holdings land set aside for public facilities. The site is larger than required for the courthouse, but will allow other eventual public structures in the future.

Presently county offices are spread across several locations, including the Minden Inn, the historic courthouse, the law enforcement center, the former public library across Eighth Street from the courthouse and a variety of satellite locations. The property is located not far from where the Town of Minden built its new maintenance facility.