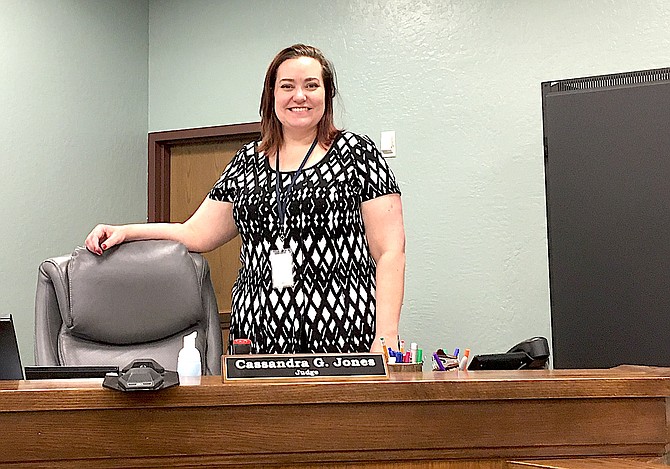 When they attended school together in Carson City, Evan Jones said he passed wife and future East Fork Justice of the Peace Cassandra a note with the question, “Will you go out with me?” with yes and no boxes to check.

She checked “yes,” Jones told the more than 350 people who filled up the Douglas County and Senior Center gym to remember the former East Fork Justice of the Peace.

Jones told the crowd that when Cassandra’s family moved to California when she was 15 she attended Elk Grove High School, where she graduated in 1997.

That’s where Cassandra Jones was introduced to the law. She attended Arizona State University, where Evan Jones followed her.

“In high school, she took a bunch of advanced placement classes,” Evan said, which allowed her to bypass her freshman year at ASU.

“It was less than a month before we packed up and moved back to Nevada because we wanted to raise a family here in Douglas County.”

She started out at Brooke and Shaw law firm in Minden before taking a position as a staff attorney with Douglas County District Judge Michael Gibbons.

“It was a great opportunity for her to nerd out on legal research while still serving her community,” Evan said.

Gibbons had high praise for Jones’ research for a 2005 murder trial that Court TV sought to televise.

During her six-year tenure, she helped establish the Special Advocates for the Elderly.

Before being elected the first woman judge in Douglas County, she served as chairwoman of the Gardnerville Town Board.

“Her death was a great loss to our community,” Town Board member Lloyd Higuerra on Aug. 3. “She was a dedicated public servant, and she served with integrity and intelligence, too. We have to admire that brain of hers. She will be missed that’s for sure.”

Jones was halfway through her first six-year term as justice of the peace when she succumbed to cancer on July 12.

Commission Chairman Mark Gardner said Jones gave him a tour of the Judicial & Law Enforcement Center that showed the inadequacies of the building. He said she was pleased when commissioners agreed to purchase the land for a new courthouse before her death.

Douglas County commissioners are scheduled to issue a proclamation on Thursday honoring Jones for 19 years of service, presenting her family with a flag that was flown at half-staff at the Douglas County Judicial & Law Enforcement Center July 14-15.

They are also scheduled to accept East Fork Constable Paul Gilbert’s resignation effective Friday so he can take the appointment as justice of the peace to finish out Jones’ term. The constable’s position will officially be eliminated on Saturday.