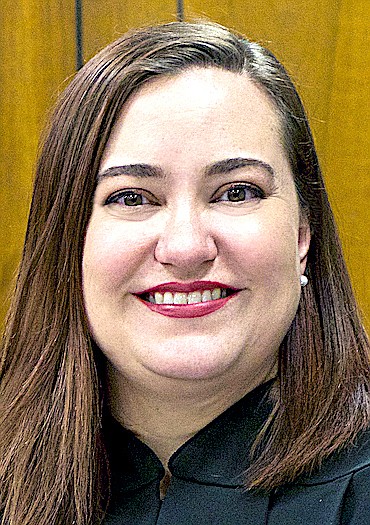 Gardnerville held a moment of silence on Tuesday evening in memory of former board member and chairwoman Cassandra Jones.

“Her death was a great loss to our community,” Town Board member Lloyd Higuerra said after the moment ended. “She was a dedicated public servant, and she served with integrity and intelligence, too. We have to admire that brain of hers. She will be missed that’s for sure.”

A memorial service is 4 p.m. Aug. 13 for Jones at the Douglas County Community & Senior Center where she took the oath of office in January 2019.

Jones was halfway through her first six-year term as East Fork Justice of the Peace, when she succumbed to cancer on July 13.

She was the first woman to be elected to the bench in Douglas County.

On Thursday, county commissioners will discuss how to proceed with finding someone to fill her term ending Dec. 31, 2024.

State law allows the county commission to either appoint someone to fill the vacancy or provide for an election to fill the seat.

It has been 12 years since county commissioners last appointment to the East Fork Bench. At that time Tom Perkins was selected after Jim EnEarl resigned. The selection process included applications from several people that were then narrowed down to five candidates.

There is no requirement in state law that the county conduct a search for candidates, though. Clerk-Treasurer Amy Burgans was appointed in December 2020 without any section process.

“Other vacancies of county and township offices have resulted in appointments by previous boards of qualified individuals without extended or elaborate appointment processes,”

Nor are there many requirements to serve as justice of the peace. Any registered voter in the township with a high school diploma, who hasn’t been previously required to give up a judicial office may be appointed.

County Human Resources Director Wendy Lang pointed out that East Fork Constable Paul Gilbert has been serving as justice of the peace pro tem on and off for the past 35 years. He has presided over thousands of criminal and civil cases.

Gilbert has already attended the required courses at the National Judicial College on court procedure, recordkeeping and elements of law.

Effective at the end of the year, Douglas County will have abolished the position of constable, transferring those duties to the sheriff’s office.

Gilbert would have to resign Aug. 26 as constable before he could take the justice of the peace job.

Sheriff Dan Coverley has indicated he would be able to take on those duties effective Aug. 29.

Commissioners could also direct staff to prepare a special election to fill the position. An election would cost $130,000-$150,000, an amount the county hasn’t included in its current budget.