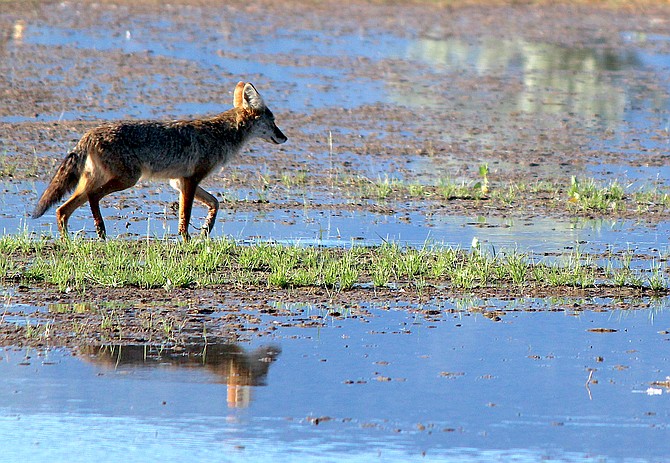 A coyote crosses a field south of Genoa Lane on Monday morning.
Photo by Kurt Hildebrand.

Genoa, Nev. — The names of three Western Nevadans up for Genoa Town Manager were released late on Monday. William Kohbarger, Michael Chapton and David Qualls are scheduled to appear for interviews starting 9 a.m. Thursday at the Genoa Town Hall. The meeting opens at 8:30 a.m.

Longtime Douglas County planning commissioner JoEtta Brown died on Saturday. Brown was chairwoman of the commission, executive vice president of the National Alliance for Retired Americans and served as chairwoman of the Nevada Commission for Women. She arrived in Carson Valley in 2001. No services have been announced.

The monsoons return today with a chance of showers and thunderstorms after 11 a.m. Forecasters are betting 50-50 that any given point in Western Nevada will see a storm on Wednesday. The chance they’ll stick around into Thursday is fairly small.

Today’s storms look like they’ll stay southeast of us, but that could change with the possibility of heavy rain from thunderstorms. The odds were pretty much the same the first week of August when record rain fell in Minden.

Today expect increasing clouds and a high temperature of 95 degrees. The wind will pick up out of the southwest at 5-10 mph this afternoon, unless you’re hanging around a storm, in which case it could be much, much stronger.