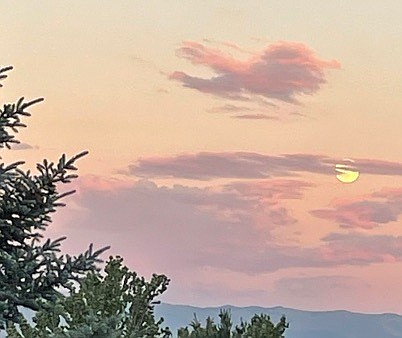 Genoa, Nev. — A thunderstorm brought rain and hail to Gardnerville and a landspout tornado out in Hazen, according to the National Weather Service. I had around .26 inches in Genoa. Minden-Tahoe Airport reported .08 inches during the day.

The Juniper Fire up above Stephanie Way was doused after firefighters got to it. We might see some more fires from Thursday’s thunderstorm should the wind catch anything smoldering. Foothill resident Jeff Garvin said his lightning detector recorded 117 strikes, mostly cloud to cloud.

If you were hoping to have a word with the God of Thunder tonight at Heritage Park, he won’t be there until August. Gardnerville’s Movies in the Park will be instead featuring “Frozen 2,” which might be a cooler option given the excessive heat watch coming on Sunday.

The heat watch starts 2 p.m. Sunday and extends through 10 p.m. Wednesday. While there are no guarantees, it’s supposed to peak at 100 degrees on Monday. The forecast high for most of next week is 98 degrees.

There are a couple of openings today, including the new Minden McDonald’s and the Genoa Bar will be hosting a new food truck. A tenth of the proceeds from the food truck will go to Austin’s House.

Expect sunny skies with a high temperature of 90 degrees. This morning’s 48 degrees is as cool as it’s going to get for next week at least. The wind will pick up out of the north 10-15 mph this afternoon.