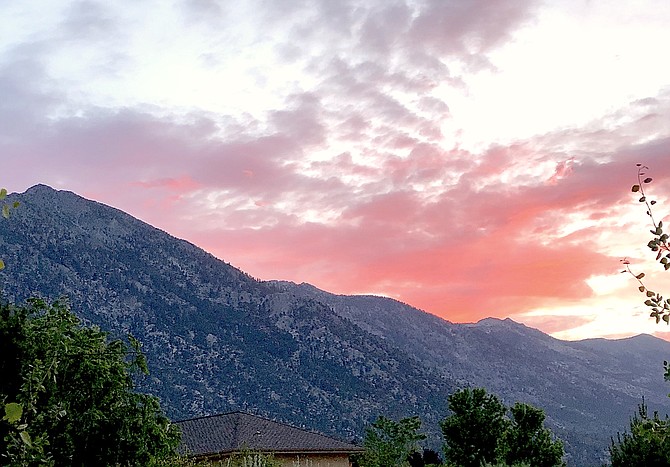 The sunset over the Carson Range from southern Carson Valley on Wednesday night.
Jeff Garvin | Special to The R-C

It rained in Carson Valley overnight as thunderstorms made their way through Western Nevada on Wednesday.

More than 56,000 lightning strikes were detected across Southern and Central California between 4 p.m. Tuesday and 2 a.m. Thursday, forecasters said this morning.

According to lightningmaps.org, there were a handful of lightning strikes around Fallon around 5 a.m. today.

Between the moisture and afternoon heating, Valley residents may expect to see additional thunderstorms today.

There’s a possibility that storms popping up over steep terrain and burn areas could bring some flash flooding.

While most of the danger will head east tonight, there’s a possibility of thunderstorms Friday and Saturday from Alpine County south into Mono and Mineral counties.

Temperatures are expected to increase back into the lower 90s over the weekend as the weather roller coaster starts to slow down.

The forecast highs for Sunday and Monday will be 94 degrees, but another trough could see another 5-10 degree drop.

Last year’s lightning storms around the beginning of July sparked both the East Fork Fire and the Tamarack Fire.