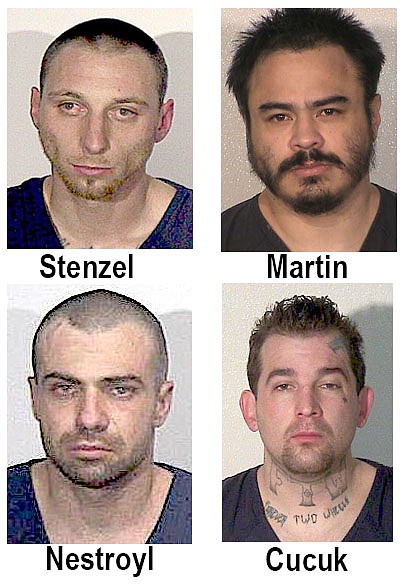 Four Douglas County Jail inmates were charged in the beating of a fifth inmate.

The fourth inmate involved in a jail cell beat-down admitted to the charges Tuesday.

Randy A. Martin, 36, and three other inmates were shown on jail surveillance cameras entering another inmate’s cell and closing the door.

According to court documents, the victim was making his bed, when the four men entered his room then pushed, hit and kicked him several times. The victim suffered a broken rib, and several injuries to the face and head.

At the time of the March 14 beating, Martin was sentenced to prison for grand larceny of a vehicle just a few hours prior. He was transported by the prison to Minden for Tuesday’s hearing.

He now faces an additional 1-4 years in prison at his Sept. 13 sentencing, along with his three co-offenders.

All four men initially denied the charges and were set for an Aug. 1 trial.

• A Wellington man who broke into the Pavilion Communications yard above Holbrook Junction and drove off with a Razor all-terrain vehicle received a suspended sentence Tuesday.

According to court documents, Sampson Lucio Nigra, 23, was seen on the facility surveillance camera entering the property by driving straight through and causing damage to the perimeter gate in a Chevrolet pick-up truck.

“You don’t have a criminal history before this, but you are a thief,” said District Court Judge Tod Young. “You had to go through a lot to be a thief and then you lied. What you did was thought out, planned and destructive.”

Nigra was sentenced to a suspended 19-60 months in prison and taken into custody to complete 45 days in Douglas County Jail as a condition of his probation. He was given credit for two days and must pay restitution in the amount of $13,897.

• A man, who walked away from the Douglas County District Court after he was ordered to test with the alternative sentencing department in June, received a suspended sentence Tuesday.

Harvey Glenn Hampton, 66, was originally arrested in May 2021 for forging a check in the amount of $1,935. He’s had a lengthy criminal history and drug use, according to court documents.

He was given 117 days credit for time served.

• A man who was discovered with 3 grams of methamphetamine in his sock during a traffic stop can face 1-4 years at sentencing Nov. 10.

According to court documents, Miky Sears, 50, is already a convicted felon for drug use. He was sentenced to prison after he violated bail conditions in December 2018 and again in 2019.

He was released Tuesday on his own recognizance.

• A nationwide warrant was issued for a Carson City man who failed to appear for court Tuesday.

Brett Michael Seslar, 22, has a criminal history including a shoplifting two pairs of shoes from a Topsy store and drug use and attempt to sell.

• A reckless driver who gave deputies a “hang lose” sign as he led them on a low-speed chase on Kingsbury grade, admitted to his third felony drunk driving charge Tuesday.

Brandon Allen Yauger, 47, was arrested after driving into a dead end after a low-speed chase on Tramway in July.

According to court documents, Yauger was reported as a reckless driver westbound on Kingsbury Grade. The caller said he watched the Subaru with Maine plates cross over the double yellow line. He was arrested at gun point. An empty tequila bottle and marijuana pipe was spotted in his vehicles, according to the police report.

According to Nevada Department of Corrections records, Yauger served a 1-3 year and 2–5-year prison term on a DUI charge. He was paroled in 2016.

• A woman whose drug use led to her arrest was deferred from a 1-4-year prison sentence Tuesday.

Rebekka Jean Sutton, 29, was ordered to stay in custody at the Douglas County Jail and report to Drug Court at the next available opening.

According to court documents, Sutton has a history of possession of illegal drugs and paraphernalia with intent to sell. In April, a controlled purchased through the Douglas County Sheriff’s Office led to her arrest. In May, she appeared for testing at the sheriff’s office where she tested positive for heroin, methamphetamine and opioids and was taken into custody.

She told the court she is ready to put the drug use behind her.