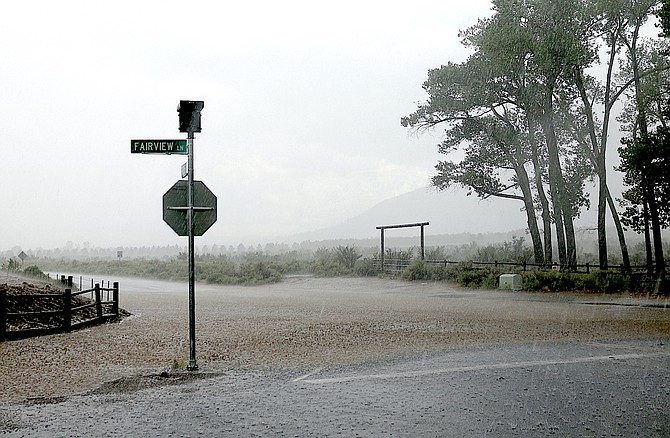 Raindrops splash on Fairview Lane at the intersection with Fredericksburg on Thursday afternoon as heavy rain fell in southern Carson Valley.
Photo by Kurt Hildebrand.

There’s a chance for more rain and thunderstorms later this afternoon along the Sierra Front.

Storms are starting to pop up along the Sierra Crest this afternoon, according to a statement issued by the National Weather Service in Reno.

Today’s storms will be later than Thursday’s and are expected to produce lightning strikes, heavy rainfall, localized flooding and hail.

Gusty winds near thunderstorms could produce winds of 40 mph or better.

The statement covers most of Western Nevada from Douglas County north to the Oregon state line and from the Sierra Crest through to the middle of the state.

Most of the rain fell in the southern part of Carson Valley, with Genoa receiving .41 inches on Thursday.

Weather Service records indicate that the 2.57 inches of rain that fell in Minden on Thursday set a new record for both the day and the month.

“Along with enough hail to shred my vegetable garden and trees with tender leaves,” he said.

“A few sandbags and we’re good,” he said.

August has seen 2.59 inches of rain, bringing the total for 2022 to 3.35 inches. That’s still short of the average 5.97 inches by this time after an exceedingly dry winter.

For the water year, which started on Oct. 1, Minden reached 9.97 inches, or 112 percent of average if not another drop falls in the county seat before Sept. 30.

During 2021, both October and December were near record months, though the traditionally wet months of January through March only saw .38 inches of precipitation when they average 4.25.