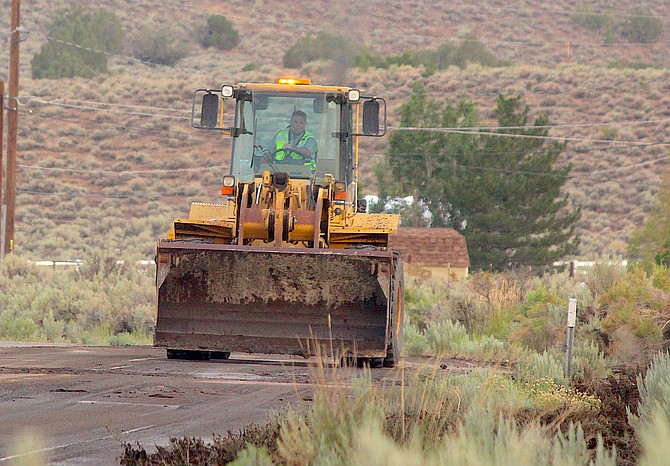 Flooding from a thunderstorm in the Pine Nut Mountains sent up to a half-foot of water over roads in Fish Springs on Friday night.

A flash flood watch was extended until 11 p.m. today for Douglas and Alpine counties as monsoon moisture is bringing thunderstorms to the region.

“Thunderstorms with heavy rain and intense rainfall rats are likely this afternoon into this evening across Douglas and Alpine counties, including the Tamarack and Numbers burn areas, as well as areas near Johnson Lane and Fish Springs,” forecasters said. “Burn scars, steep terrain and small creeks are at greatest risk of flooding.”

This morning, a front-loader was clearing rocks and mud off Jacobsen Lane where it was overflowed by Pine Nut Creek.

The first reports of flooding came in before 8 p.m. Friday. Firefighters in the area reported several roads were impassible due to high water. Pine Nut Creek was reported to be full at 8:30 p.m. Friday.

Pine Nut Creek runs along Fish Springs Road through the neighborhood located at the base of the Pine Nuts east of Gardnerville.

Water was still flowing in the typically dry creek 12 hours after the first reports of flooding.

Debris flows were reported at Indian Creek Reservoir by firefighters working the Tamarack Fire that was 5-feet wide and at least 3 inches deep around 6 p.m.

The California Highway Patrol reported mud and water across Highway 395 at Sonora Junction around 5:10 p.m.

A gauge at Holbrook Junction recorded a half inch of rain, while a gauge in the Pine Nuts placed after the Numbers Fire near Sugar Loaf Mountain recorded a quarter-inch of rain fell above Pine Nut Creek.

The Carson River is expected to crest at 1.7 feet at 2 p.m. today in Carson City thanks to flooding along it’s length.

The flooding on Friday night was far less intense than the Aug. 6, 2014, flood that saw more water in Pine Nut Creek than in the East Fork that day.