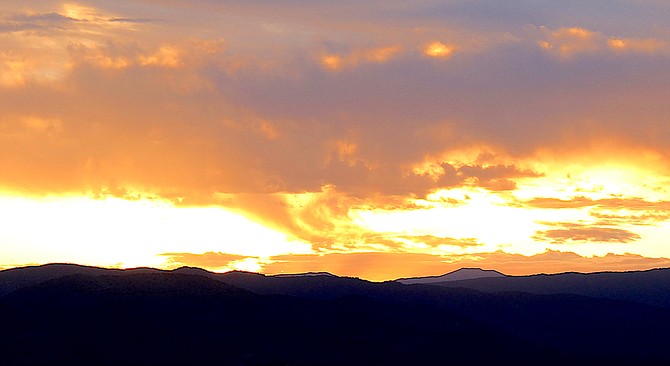 Clouds shine in the sunrise on Saturday morning. Photo by Kurt Hildebrand.

There’s a possibility thunderstorms could fire up as early as 10 a.m. today as forecasters call for rain today and Sunday.

“In general, a tenth to a fifth (of rain) will be possible in the band associated with steadier showers, but significantly higher amounts will be possible in areas of stronger convection and from embedded thunderstorms,” National Weather Service Reno Meteorologist Marvin Boyd said. “It wouldn’t be too surprising to see some spots getting an inch of rain or more from a heavy thunderstorm.”

Showers are expected to develop along and north of Highway 50 before spreading across Western Nevada by early afternoon.

“Snow levels will be low enough, around 9,000 feet, for some light accumulating snow over Tioga and Sonora passes. This could catch travelers off guard.”

Both passes opened in recent weeks, along with Ebbetts Pass in Alpine County, which opened on Thursday.

A weather statement issued on Saturday morning called for widespread showers and thunderstorms through the weekend.

Thunderstorms cold bring heavy rain, hail and lightning. Winds around thunderstorms could be 35-55 mph and could at times appear to come out of nowhere, forecasters said.

“Be sure to have a way to receive weather alerts if you have outdoor plans,” forecasters advised residents. “Be prepared for cooler temperatures, rain and have a plan to reach shelter should thunderstorms approach your location.”

Minden hasn’t seen any precipitation since April 14 when it officially recorded a fifth of an inch. Gauges in the North Valley reported around a half inch of moisture in the 4 inches of heavy wet snow that fell that morning, according to weather watcher Don McRoberts.

In the month since, warm dry temperatures have dominated while wildflowers took advantage of the brief wet spell to bloom.

The prospect of lightning could bring wildfires, according to forecasters, who reminded residents to report smoke that they see.