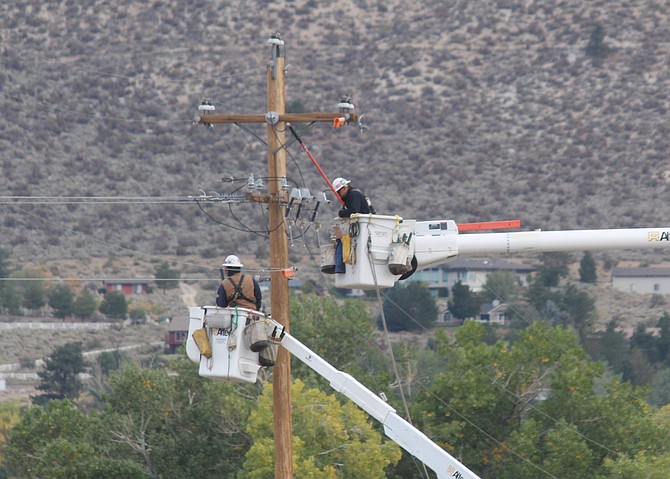 Forecast critical fire weather resulted in the shut-down of power to 35 NV Energy customers along Jacks Valley Road and in Clear Creek on Monday night.

A spokeswoman said late last night that the public safety outage has been canceled for the other 565 customers in the region that stretches from Genoa north to Clear Creek.

Workers checked the line along Jacks Valley Road near the Washoe house to make sure it was safe to re-energize.

An alert for the outage was issued Sunday night after the National Weather Service issued a red flag warning for the Sierra and Western Nevada.

A gauge at the base of Spooner Summit recorded a 43-mph wind gust at around 8 p.m. Monday.

An NV Energy wind gauge set up in Genoa recorded a peak gust of 19 mph around 2:40 a.m. Tuesday. The town is somewhat sheltered from southwest winds by D Hill to the south.

A cold front is bringing higher humidity to the region, prompting the National Weather Service to allow a red flag warning to expire at 5 a.m. today.

It its place forecasters issued a wind advisory for Pyramid Lake from 8 a.m. to 8 p.m.

A red flag warning for the Sierra Front and most of Western Nevada today has prompted NV Energy officials to issue a public safety outage alert for Genoa and Kingsbury Grade.

The critical fire weather warning is in effect through 5 a.m. Tuesday for gusty winds and low humidity are expected as a cold front arrives in the central Sierra.

Should the power company determine shutting off the power is necessary that’s predicted to occur before midnight on Monday and end 4 p.m. Tuesday.

Winds peaked at 35 mph at 3:15 p.m. Monday, according to Minden-Tahoe Airport’s weather station. Winds were picking up again on Monday evening with a 26 mph gust at 6:15 p.m.

The outage would affect 600 NV Energy customers it it comes to fruition.

This will be the third safety outage warning issued by the power company this season. So far, none has resulted in the electricity being shut off. The outages are part of the power company’s efforts to keep its equipment from starting wildfires. For more information visit nvenergy.com/psom

While firefighters working the Caldor Fire are preparing for increased winds on Monday, only the extreme eastern portions are covered by the warning.

Much cooler temperatures are expected on the other side of the cold front with forecast lows dipping below freezing to 31 degrees by early Wednesday morning.

Strong southwest winds are expected Monday afternoon and overnight shifting north on Tuesday as the cold front arrives. With extreme dry conditions over the Black Rock and other deserts, that wind may bring fine dust south.

“After a warm weekend, temperatures will fall around 20 degrees by Tuesday-Wednesday,” forecasters said on Sunday afternoon. “This could result in the coldest high temperatures the region has experienced since May.”

Forecasters say freezing temperatures could be a few degrees colder than last week’s cold snap with lows dropping into the teens in colder Sierra valleys.

There is a small chance of showers after 11 p.m. Monday in Carson Valley. The shift in winds is expected to bring some clearing of the haze from smoke that has hovered over Carson Valley during the weekend.