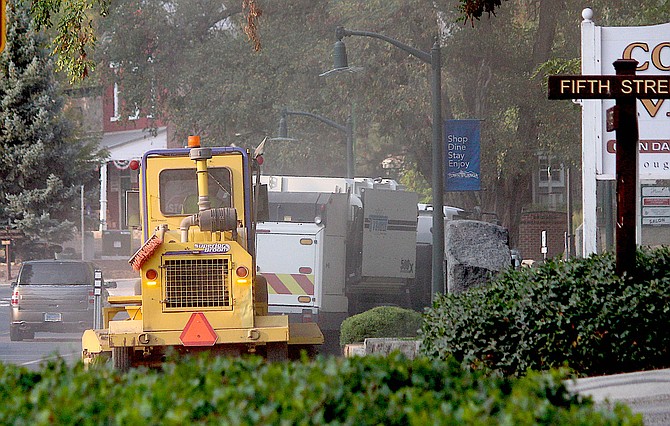 Street sweepers were sprucing up Genoa on Thursday morning as Candy Dance looms on Sept. 25-26.
Photo by Kurt Hildebrand.

The potential for critical fire weather this weekend has prompted NV Energy to notify customers that it might turn off the electricity to portions of the Lake Tahoe Basin and Carson Valley on Sunday.

The forecast calls for southwest winds 15-25 mph gusting to 35 mph, and 40 mph in wind-prone areas.

The watch is for 4-8 hours on Saturday as a cold front arrives in Western Nevada over the weekend that could bring snow to the High Sierra on Monday.

Concerns about power lines setting fires have prompted the power company to explore shutting the power off on Sunday.

Lake Tahoe residents, and those along the Sierra Front from Genoa north, are most likely to be affected, but NV Energy also included Minden, Gardnerville, the Pine Nuts and Topaz on the list.

According to the company, up to 52,000 customers are affected.

“A watch means that an outage event is possible based on current forecasts,” according to the power company. “Details on the timeframe and duration of the event will be provided as we get more detailed weather forecasts.”

The company shuts off the power lines to prevent equipment from causing wildfires.

White House Inn Manager Lacey Ludwig said she has a full house at the Genoa bed and breakfast this weekend.

“We’re terrified at the thought of having to cancel,” she said. “We’ve lost all of September due to the smoke and possible evacuations. We just can’t afford to lose a weekend.”

Ludwig said she is hoping the weather will turn around.

“We understand the reasoning behind it, but we’re not really sure what we’re going to do.”

With Candy Dance on Sept. 25-26, Genoans are concerned that the outage could affect the town at a critical point during the preceding weekend.

Genoa Town Manager Matt Bruback said the town has weddings over the weekend as well.

The last time a public safety power outage watch was issued was Aug. 17 when Carson Valley was under a red flag warning.

Because power crews have to inspect lines after the wind stops, the outages can last beyond the time covered by any warning issued by the National Weather Service.

Liberty Utilities may implement a similar outage for areas it serves in the Sierra, including Mono County, due to extreme fire conditions. The outage is not imminent at this time; however, customers are encouraged to plan ahead for the possibility of an extended shutoff that could begin 1 a.m. Sunday, and last more than 24 hours.