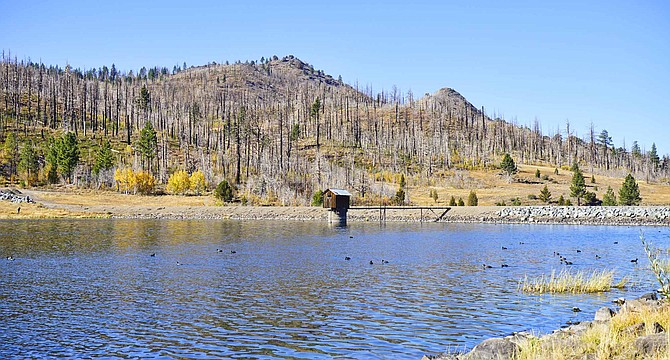 The weather at Heenan Lake is expected to change from beautiful to beastly as Monitor Pass closes at 5 p.m. today for a storm expected to arrive tonight.
John Flaherty | Special to The R-C

A red flag warning issued for Alpine and northern Mono counties was canceled at 2 a.m. Monday after precipitation arrived before it was anticipated. Meyers reported 3.5 inches of snow containing .34 inches of moisture as of 9 a.m. Monday.

With wind prone locations along the southern Sierra Front predicted to see gusts of up to 80 mph and low humidity, the National Weather Service issued a warning for critical fire danger.

A high-wind warning has been issued starting 2 p.m. for Mono County from Coleville south to Mammoth Lakes today, with 20-30 mph winds gusting up to 60 mph.

“Damaging winds will blow down trees and power lines,” forecasters said. “Widespread power outages are expected. Travel will be difficult, especially for high-profile vehicles. Burned or damaged trees in burned areas may be blown over during these high winds”

After being open for all of three days, the California Department of Transportation is closing Monitor, Ebbetts and Sonora passes today in preparation of a storm front expected to arrive tonight.

Monitor and Ebbetts passes are scheduled to close at 5 p.m., with Sonora Pass closing at 3 p.m.

A winter weather advisory starting 7 p.m. has been issued for Stateline and other areas of Lake Tahoe with snow accumulations of 3-6 inches forecast above 7,000 feet and 1-2 inches at Lake level.

“Plan on slippery and snow-covered road conditions for Sierra passes with chain-controls and slow-downs possible,” forecasters said. “Areas of heavier snow bands are possible which could lead to rapidly deteriorating conditions and reductions in visibility.”

The advisory doesn’t expire until 5 a.m., and so could affect Monday’s commute over Kingsbury Grade and Spooner Summit.

A wind advisory has been issued for most of Western Nevada, including Carson Valley, for 2-11 p.m. today.

Forecast southwest winds of 20-30 mph with gusts up to 50 mph. Highway 395 could see gusts of up to 60 mph through Carson Valley north of Minden. The brunt of the winds are forecast for 4-7 p.m.

Forecasters suggest securing loose outdoor items before the winds pick up and prepare for power outages caused by the storm.

The snow level is expected to drop to 4,700 feet after midnight. Even in the snowier parts of the Valley, accumulation of less than a half inch is forecast.

The week could see more precipitation on Wednesday and Friday, according to the long-range forecast.

There’s a possibility that an atmospheric river could be headed this way starting next weekend, forecaster said.