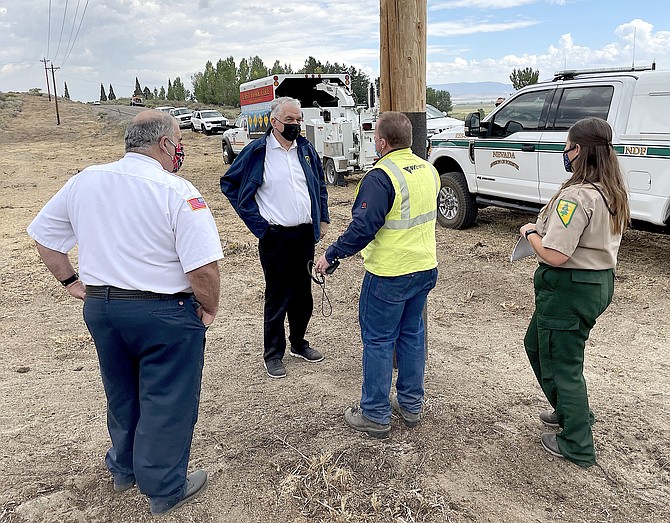 Gov. Steve Sisolak tours power lines along Foothill Road on Friday that were cleared of brush by an East Fork hand crew funded by NV Energy to prevent equipment from causing fires and help stop fires from damaging equipment.

Firefighters increased containment to 60 percent of the Caldor Fire as of Saturday morning, as the fire grew only 30 acres overnight, according to the 7 a.m. update.

The fire was reported to be 218,489 acres, an increase of 543 acres over the 217,946 reported on Thursday morning despite two days of red flag warnings due to thunderstorms, gusty winds and low humidity.

The number of firefighters working on the blaze dropped to 3,989 as concerns about the Dixie Fire 90 miles to the north resulted in a shift in resources.

While the fire was active overnight, there was minimal growth in two sections and none around any of the rest of the perimeter that stretches 70 miles from near Pollock Pines to South Lake Tahoe.

“Interior islands and green stringers have retained heat that will pose potential threats during the heat of the day.”

Crews on the southern flank of the fire’s eastern finger are continuing to work to keep the fire from moving south or east.

Firefighters will focus on the area north of Strawberry Creek, 3 miles northwest of Caples Lake as they work to complete fire lines.

More firefighters were injured while slowing down the fire, with three more in the past 24 hours according to Saturday morning’s update to make 13 total. There have been no deaths among firefighters or civilians in the fire that has destroyed 782 homes and 18 commercial properties.

On Friday, Nevada Gov. Steve Sisolak toured Foothill Road where hand crews have been clearing brush from power poles on his way up to Stateline.

The Caldor Fire never reached the Silver State, though Stateline and Kingsbury Grade were evacuated ahead of the fire on Aug. 31. Had the fire reached the state line, Foothill Road residents were warned to be prepared to evacuate. Those orders were lifted after firefighters were able to halt the fire three miles from the Douglas County line. At noon today, all of the precautionary evacuations warnings for Douglas County will be lifted.

"While the precaution warnings have been lifted on the Nevada side, residents are still encouraged to always remain on the alert and be prepared for any possible future emergencies," Douglas officials said on Saturday morning.

Air quality at Minden, which saw some of the highest readings in the Valley was in the good range at 5 a.m. Saturday with a reading at 32.

According to this morning’s forecast, firefighters will benefit from lighter winds and mostly clear skies with temperatures around 75-80 degrees, according to the Saturday forecast.

“Smoke impacts will generally be confined to the immediate area of the fires at least through the weekend,” forecasters said. “If fire activity increases due to the drying and warming conditions then more areas could be impacted as we had into early next week.”

Highways 50, 88 and 89 through the fire area remain closed today.

On Friday afternoon, El Dorado County downgraded mandatory evacuations, permitting residents to return to their homes in the area of Meyers that are north of the traffic circle at Highway 50 and Highway 89.

“This includes the area of Pioneer trail from Meyers through Elks Club, Upper and Lower Apache, Keetak, Cornelian, and all residences accessed from Saw Mill on the northern edge,” according to the order.

Neighborhoods west and south of Meyers remain under mandatory evacuations.