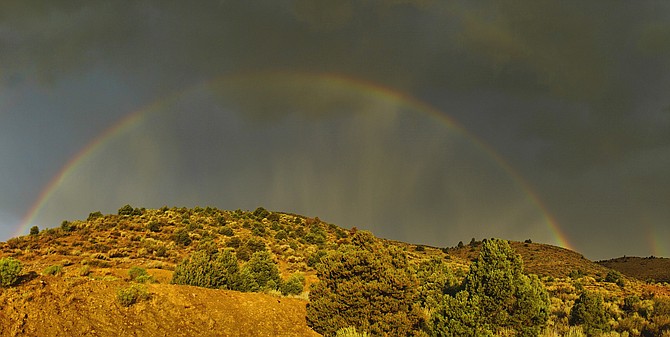 Topaz Ranch Estates resident John Flaherty took this photo of a rainbow from over Gold Hill on Friday morning.

Genoa, Nev. — Mumbo Gumbo will be performing in Minden Park 6 p.m. today as part of the Bently Nevada concerts in the Park. Seyfried Dental Arts is sponsoring the concert.

The Douglas County Sheriff’s Mounted Posse will be at the intersection of highways 395 and 88 in Minden 10 a.m. to noon on Saturday in observance of Sept. 11. The Douglas County Republican Central Committee is conducting a vehicle rally during the morning, which marks 20 years since the 9-11 terrorist attacks.

The Burgers For Badges barbecue in support of Douglas County Sherif’s Office personnel, including the Posse, Search and Rescue and Citizen’s Patrol is 4-7 p.m. Saturday. Re/Max and Sierra Pacific Mortgage are hosting the event at Minden Park.

It wasn’t much but Genoa received .04 inches of welcome rain this morning for the first time since July 27. It’s possible we may see some more rain today before 2 p.m. There were still some cells on the radar this morning.

The rain washed the smoke out of the air over Carson Valley with air quality on the cusp of being good for the first time in a long time. However, both Caldor and Dixie are still burning, so enjoy that morning stroll while you can.

A red flag warning remains in effect for most of the Sierra, including over the Caldor and Dixie fires, which as of this morning are at around 1.15 million acres burned. Firefighters have been shifting back and forth between the blazes with Dixie accounting for 4,800 this morning and Caldor having 4,028.

Fire officials hope to have both blazes contained by the end of the month. The Caldor estimate remains at Sept. 27, while Dixie is Sept. 30. Whether events allow that to happen remains to be seen.

We could see more scattered showers today and breezy conditions before 2 p.m. The high temperature is forecast to hit 81 degrees. The southwest wind is expected to pick up to 15-20 mph this morning, gusting to 30 mph.