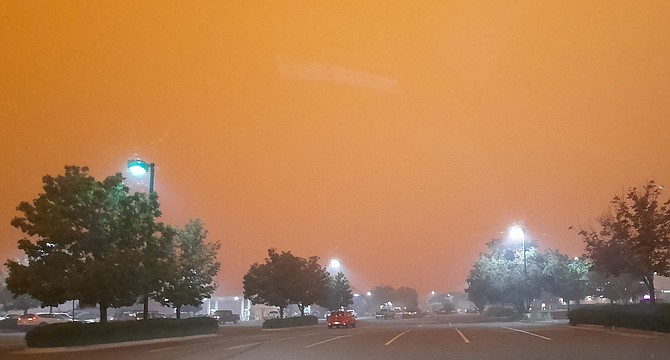 Gardnerville resident Mary Hartnett took this photo of the streetlights on at the Smith's due to the smoke on Tuesday. The R-C received more than a dozen photos from readers. We'll get as many in as we can over the next couple of issues.

Genoa, Nev. — Air quality bottomed out at hazardous levels 6 p.m. Tuesday in the Gardnerville Ranchos with an air quality index of 327. The smoke cast such a pall over Gardnerville that the streetlights came on early and there’s a report that chickens fell asleep where they stood.

As of 5 a.m. today, air quality is up to unhealthy for sensitive groups with a reading of 124. The Weather Service is forecasting that the cold front that was supposed to bring gusty winds on Tuesday may help clear out the smoke.

Visibility from the smoke was down to a half-mile 5:35-5:55 p.m. Tuesday at Minden-Tahoe Airport. Right around the same time the wind was up to 35 mph. So much ash fell on Tuesday evening the airport weather sensor detected it as light rain. The Caldor Fire is burning just 33 miles from Gardnerville as the magpie flies.

There’s no way the Caldor Fire is only 23,000 acres. The fire’s footprint is very similar to the Tamarack Fire’s 68,637 acres, and the measurement tool in the Fie Information for Resource management System is showing closer to 80,000 acres with zero percent containment.

The same mapping is showing Caldor is threatening Highway 50, so don’t be surprised if that closes somewhere near Pollock Pines at some point today. Highway 395 north is still closed at Hallelujah Junction all the way to Susanville for the Dixie Fire.

Containment of the Dixie Fire has been delayed until the end of September. Fire officials hope to have a line around the Caldor Fire by the end of this month. The little Fay Fire on Jobs Peak was out as of Tuesday.

So what’s the good news? Well, Sierra Chef will be hosting the Farmers Market at Heritage Park in Gardnerville 8 a.m. to 1 p.m. today in the hopes that the forecast calling for clearer air today comes to fruition.

The planned safety outage between Genoa and Clear Creek was canceled around 5 p.m. The outage was never about the Caldor Fire, but was concerned with the red flag warning.

It’s going to be smoky today, but it might clear a bit around 4 p.m. thanks to a cold front and a change in the wind direction pushing the smoke back over the Sierra. The high is expected to hit 80 degrees.