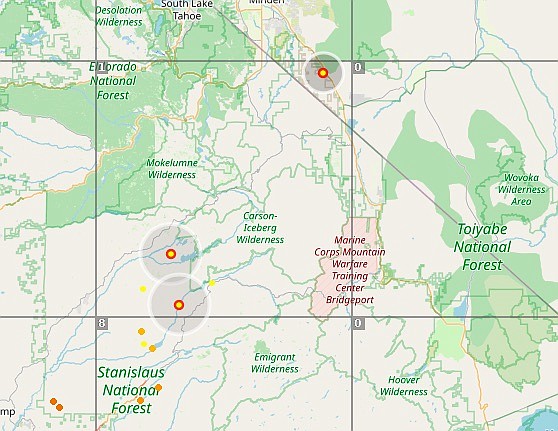 A screenshot from lightningmaps.org from 5:07 a.m. Friday morning

Thunderstorms that moved across the Caldor Fire early this morning brought gusty winds, but not as much lightning, aiding firefighters in their efforts to bring the blaze under control.

As of Friday morning, the fire has burned 218,459 acres and is at 53-percent containment.

“Firefighters focused on holding and securing containment lines as winds gusted up to 40 mph on ridge tops and 10 mph in the valleys overnight,” fire officials said Friday morning. “Thunderstorms moved through the fire area around midnight and again at 5 a.m., bringing some light to wetting rain, but minimal lightning. Crews monitored and increased line depth adjacent to Lower and Upper Echo Lakes, patrolled for areas of heat in Christmas Valley where felling crews worked throughout Thursday to remove hazard trees, and ensured the containment line north of Strawberry Creek held through the adverse weather.”

Critical conditions over the fire, including thunderstorms, low humidity and gusty winds, prompted the National Weather Service to issue a red flag warning through tonight.

“Winds are expected to increase today and persist through tonight with gusts up to 60 mph on the ridges and 40 mph in the valleys resulting in more active fire behavior and creating greater potential for spotting in the very dry fuel outside the existing fire footprint,” officials said. “Today, firefighters will be working hard to secure lines in this high risk burn environment.”

A strong thunder cell developed over the central Sierra this morning, according to the National Weather Service.

At 4:57 a.m. the Weather Service issued a statement that Doppler radar was tracking thunderstorms along a line extending from seven miles northwest of Dog Valley to six miles east of Meyers at 30 mph.

The storm is bringing winds of 30 mph and could knock down tree limbs and blow around unsecured objects.

Lightningmaps.org showed lightning strikes in the Pine Nuts and the Sierra this morning as the storm moves northeast.

According to National Weather Service radar, a strong cell passed over Lake Tahoe to the west of Carson Valley. Another cell is heading northeast over the Sierra Crest at 5:40 a.m.

At least two waves from the storm have passed over the Caldor Fire this morning.

Alertwildfire.org cameras show a little bit of precipitation accompanied by flashes of lightning as the storm passes.

A red flag warning for thunderstorms, low humidity and gusty winds continues through 11 p.m. tonight for both the Caldor and Dixie Fires.