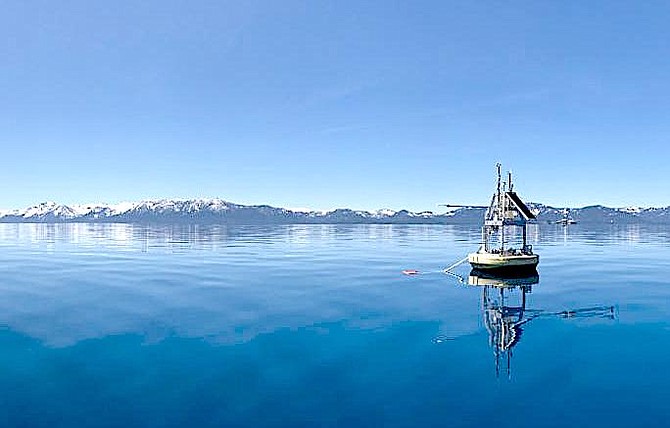 Lake Tahoe is getting warmer, according to the UC Davis Tahoe Environmental Research Center

The cold front that rolled through Western Nevada on Monday took considerably more moisture out of Lake Tahoe than it left in precipitation.

Winds accompanying the front sucked up 1-1.5 inches from the Lake’s level over 36 hours.

That’s the equivalent of 4-6 billion gallons, which is what evaporates from the Lake in a typical week, according to the University of California, Davis Environmental Research Center.

It’s as if every human being on Earth filled up a gallon bucket and carried it over the Sierra crest to dump on the Western Slope over the course of two days.

The decrease caused the Lake to reach its official natural rim at 9 a.m. Tuesday, six days sooner than anticipated. Lake Tahoe has dropped below its 6,223-foot natural rim a score of times over the last century.

With it no longer spilling into the Truckee River, the Lake joined its Nevada cousins Pyramid and Walker as a terminal lake.

According to researchers, the average evaporation from the Lake is 72 inches a year. The 1.2-inch drop earlier this week was nearly four times the rate typically experienced.

Much of that wound up in the mountains due south of Lake Tahoe in the form of lake effect snows with reports of 1-4 inches falling in places.

As colder temperatures arrive, stream flows out of the Sierra will also slow down.

While nowhere near the record low, Minden dropped down to 26 degrees on Monday and 25 degrees on Tuesday.

The Tahoe Fire & Fuels Team announced they could be starting prescribed burning as early as November depending on the weather during the last half of October. For more information, visit tahoelivingwithfire.com

There’s a slight chance of moisture the middle of next week, but until then the forecast calls for mostly sunny skies with highs in the upper 60s to lower 70s.