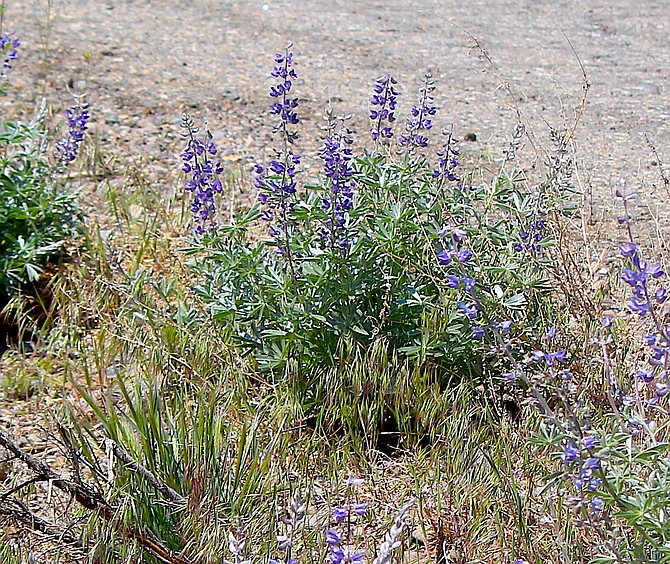 Wildflowers and grass are coming up along Out-R-Way in the Pine Nut foothills on Monday morning. Photo by Kurt Hildebrand.

While the data indicates the Pine Nut Mountains could see a break from annual wildfires, a wildflower bloom from a wet April 14 storm could contradict that.

While the heavy wet snow laid down the cheat grass in the Pine Nuts, making it more difficult to ignite, wildflowers used the moisture to get busy, and are starting to show their colors.

“We are in an exceptional state of drought,” she said at a briefing last week. “We haven’t seen anything this severe in the last 20 years.”

But drought years tend to see more severe wildfires at mid-to-higher elevations, which could be bad news for the Sierra this summer.

One of the biggest fires in Western Nevada, the 2004 Waterfall fire, struck western Carson City toward the end of the drought at the beginning of the century.

“Mid-to high elevations is where we see more of the larger fuels available to burn in more notable years of drought,” she said.

Palma cautioned that doesn’t mean there won’t be any large grass fires this summer.

“But this does not line up with the type of year to where we see above normal acreage fires at lower elevations,” she said.

She said dry conditions into June will dry out fuels and melt off the last of the snowpack. While there’s a chance monsoon moisture will help slow down fire season in Southern Nevada, it’s fairly rare for that weather pattern to make it all the way up to Carson Valley.

Monsoons are what brought the significant flash floods to the Valley in 2014 and 2015.

Around two-thirds of wildfires in Nevada’s federal lands were started by people last year, up from around 40 percent in previous years.

“A lot of our live fuel moistures are at average or below average for this time of year,” Petersen said. “We encourage everyone to recreate responsibly. The goal is to reduce the risk of human-caused fires.”

Fire restrictions, including on campfires, shooting, using exploding targets and fireworks, will likely be implemented on public lands.”

Sanchez urged residents and visitors to be fire conscious on public lands.

“I can’t say enough how important prevention will be going into this fire season,” Sanchez said.

Nevada State Forester Kacey KC said Sierra Front firefighters will be stepping up early response to fires in order to keep them small.

“All of our agencies work together,” she said. “Whoever is closes will come to the fire to ensure it gets out early and stays small.”

The state and NV Energy have funded local hiring of 130 firefighters across the state to serve in crews to reduce fuels and respond to wildfires.

She said the Bureau of Land Management has treated more acreage in Nevada than any other BLM district.

“We are working to try and protect all of the communities and the wildlands we all have to enjoy and recreate in,” she said.