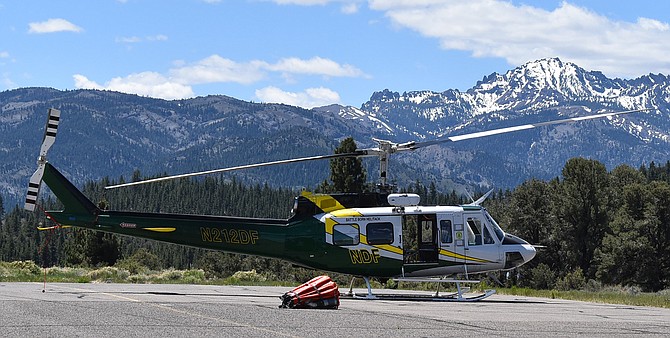 A small fire at Van Sickle State Park above Stateline at Lake Tahoe caused some consternation but was extinguished before it did any damage.

Sierra Front Interagency Dispatch Center reported the .12-acre fire at 3:30 p.m. Tahoe-Douglas Firefighters posted that the fire was out by 4:30 p.m. They said cause of the fire is still under investigation.

The fire during a blustery afternoon was a reminder that hot dry conditions will contribute to the danger of a major conflagration this summer.

Forecasters are concerned that higher elevations with trees and large brush will be more vulnerable to fire this summer due to the drought.

While dry winters often see less chance of fire in lower elevations due to a lack of grass, the recent rains may have encouraged enough growth to see fires in the lower areas of the Pine Nut Mountains, forecasters said.

“In advance of what promises to be one of the most challenging wildland firefighting seasons in recent history due to tinder-dry conditions in the West, the Nevada Army Guard and Nevada Division of Forestry teamed on Tuesday to practice their coordinated response to future wildfires along the Nevada and California border,” Sgt. First Class Erick Studenicka said.

he Nevada Division of Forestry representatives included more than two dozen firefighters and the division’s new “Battle Born helitack” helicopter also equipped with a water bucket. The training was based at the Alpine County Airport near Markleeville and the helicopters used Indian Valley Reservoir to collect water.

Mother Nature got all the cold wet weather that often accompanies the Memorial Day weekend out of her system last week.

Forecasters say it’s going to be hot and dry with a chance of isolated afternoon thunderstorms over the high Sierra on Saturday and Sunday.

High temperatures are expected to climb into the lower 90s in Western Nevada by Memorial Day.

“With nearly full sunshine and light winds, heat health impacts are possible for those sensitive to heat or those outdoors for extended amounts of time,” Reno National Weather Forecaster Chris Smallcomb said on Thursday. “Even hotter and more impactful temperatures, approaching records, are projected Tuesday-Thursday next week.”

Warm temperatures will make a big dent in the last shreds of the Sierra snowpack, which was already quickly melting over the last few weeks.

With no wetting rain expected over the next two weeks, drought conditions in Douglas County are expected to worsen unless monsoon rains make it this far north.

The county is encouraging its water customers to conserve by limiting when they water.

County officials are asking residents not plant new lawns between July 1 and Sept. 30.

County commissioners approved a resolution declaring drought conditions in the county and encouraging residents to conserve.

County officials reminded residents that it is a violation of Douglas County Code, Title 20.F.30 to waste water by allowing water to pool, pond or run off property from over-watering.

That does not affect ranchers using flood irrigation on their fields.

The county is not the major water purveyor within its boundaries.

Most residents receive their water from one of the general improvement districts, Minden, the Gardnerville Water Co. and individual wells.