Dry conditions increase need to be careful with fire 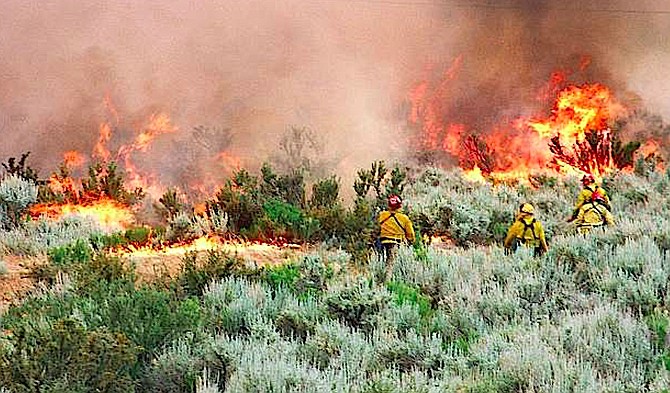 Firefighters face a wall of flames above Foothill Road near Kingsbury Grade in this June 23, 1996, photo taken by Kurt Hildebrand.

The first explosions were heard over Nevada’s oldest town at about 12:44 p.m. Monday. Residents puzzled over the source of the blasts and around the 10th one, someone called the Sheriff’s Office.

After responding at around 1:30 p.m., deputies followed a road all the way up the hill overlooking Genoa and found two men who were clearing out a storage shed. One said he found some Tannerite binary explosive targets, and rather than dispose of them, decided to shoot them.

“On the hillside was dense and dry brush and shrubs,” the responding deputy wrote. “Splintered pieces of wood were scattered throughout the area from shooting the Tannerite.”

The reaction of the East Fork Fire Battalion Chief was predictable — there wasn’t a worst place to shoot weapons, let alone shoot Tannerite.

“(The shooter) was using the Tannerite in a heavily wooded area which could potentially cause a large wildland fire,” the deputy said in his report accompanying a citation.

Next month marks a quarter of a century since the June 23, 1996, Autumn Hills fire was started by two teenagers dipping lizards in a pan of gasoline and letting them loose into the sagebrush. Four homes were lost in that fire, which claimed 3,400 acres along Kingsbury Grade.

Legend has it the Great 1910 Genoa Fire was started by an inmate of the poor house trying to smoke bedbugs out of a mattress. That blaze destroyed the county courthouse and much of the town.

The key difference between a fire caused by lightning and one that’s caused by people is that lightning announces itself with a bright crack from the heavens and a loud noise.

With drought spreading into Western Nevada, dry conditions will increase the possibility of wildfire through the summer and into fall.

A small wildfire above Hope Valley was extinguished on Sunday afternoon, an indication of the danger.

In an effort to increase awareness about what residents can do through the year to reduce fire danger, the University of Nevada Cooperative Extension, local, state and federal firefighting agencies are embarking on a six-month-long “Nevada Wildfire Awareness Campaign,” starting this month and through October.

For information on the Nevada Wildfire Awareness Campaign and on how to reduce the wildfire threat, visit LivingWithFire.com or email jamier@unr.edu.