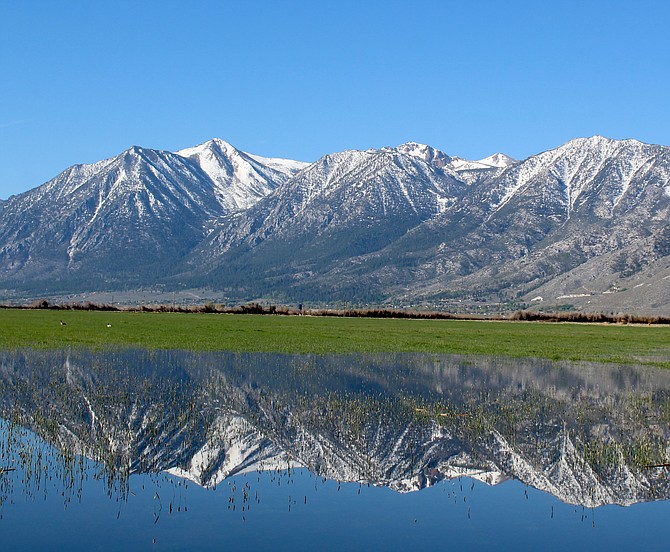 Jobs Peak is reflected in a flooded field along Genoa Lane on Tuesday morning. Photo by Kurt Hildebrand.

Genoa, Nev. — For the second morning in a row, Douglas County deputies and East Fork medics responded to a report of an intruder being shot. The call came in around 4:05 a.m. at an address in the 1200 block of Alicia Circle in the Gardnerville Ranchos. The alleged intruder suffered a shoulder wound and was taken to Carson Valley Medical Center for treatment.

Douglas High School will be conducting an in-person graduation ceremony on June 5 after seniors decided to skip the parade. That means Carson Valley Days’ will have June to itself.

The fate of the former Gardnerville Laundry may be decided in August. Owners Joe and Dave Nishikida have cleaned up the property, but the building doesn’t have much of a roof. They and the town board have struggling over this since the building was hit by a car in 2019.

While it’s not on tonight’s agenda, I wager the siren will be the topic of some discussion at the Minden Town Board. The board is also going to discuss changes to the Seeman Pond project and an evaluation of Town Manager JD Frisby at their 5:30 p.m. meeting in the CVIC Hall.

It will be a pretty warm Cinco de Mayo in Carson Valley today, with the high expected to hit 82 degrees under sunny skies with the breeze picking up out of the west at 5-10 mph.