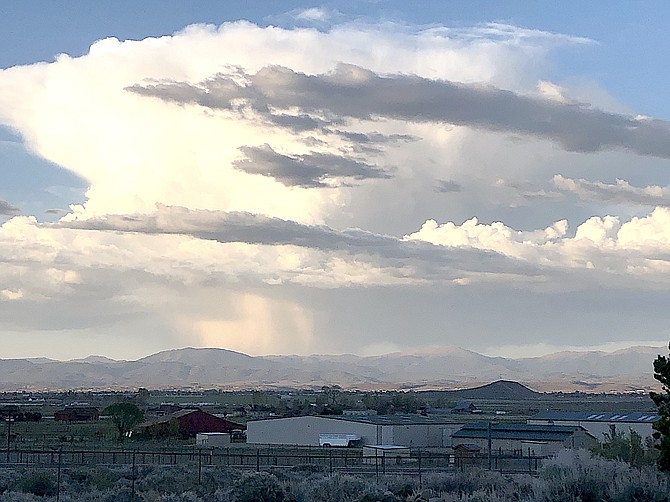 Carson Valley resident Jeff Garvin captured this photo of a thunderstorm to the north on Wednesday night.

Genoa, Nev. — Douglas County commissioners are scheduled to conduct a first reading of the proposed Vacation Home Rental rules today. They’ve set aside two hours, so it sounds like they’re taking public comment. There’s a long letter in the packet from an AirBnB representative, which I believe shows the county’s struck near the mark.

County commissioners will hear presentations from the American Wild Horse Campaign and the Bureau of Land Management to open today’s meeting 1 p.m. at the CVIC Hall. You can go or watch online by visiting douglascountynv.gov and clicking agendas and meetings.

Minden Town Board members approved a 3 percent merit raise after giving Town Manager JD Frisby a glowing evaluation. The only mention of the siren at Wednesday’s meeting was Board Member Steve Thaler citing it for the reason he paused during a thought on something else entirely.

I drove Centerville early Wednesday morning between Highway 88 and Foothill Road. The county is still doing some touch-up, but I look forward to reporting that project is at long last done.

It’s likely we’ll learn the identity today of the intruder shot and killed in Topaz Ranch Estates on Tuesday. Wednesday’s intruder in the Ranchos was taken into custody on a burglary charge after being treated.

Expect sunny skies with a high temperature of 82 degrees with the wind out of the southwest 15-20 mph this afternoon gusting to 30 mph. It will cool down into the low 70s over the weekend.