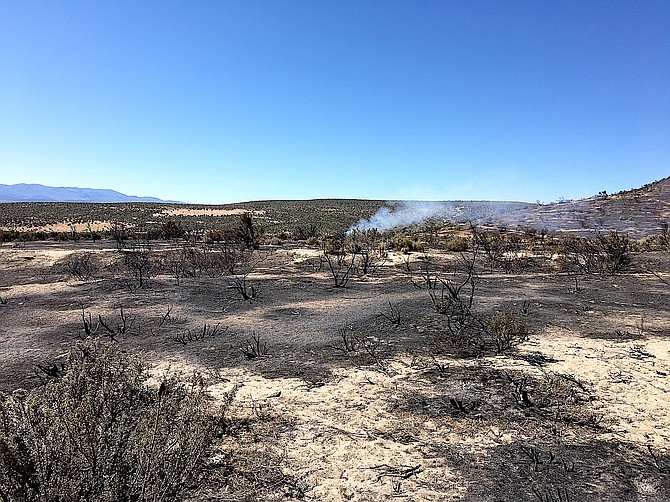 The charred remains of rabbit and buck brush west of Jacks Valley Elementary School as firefighters respond to the last smoke.
Photo by Kurt Hildebrand.

“The fuels crew had just cleared the entire pole line all the way past the school,” East Fork Fire Chief Tod Carlini said on Thursday. “Had that not been done, the fire could have gone across Jacks Valley Road and created an additional front for us.”

The 10-member fuels crew funded by NV Energy was on duty Wednesday, providing East Fork with significant reinforcements early on in the blaze, which burned right up to and around Jacks Valley Elementary School and homes.

The wind-driven blaze started near Jacks Valley Road around 4:30 p.m. Wednesday and blasted up the hill separating Alpine View from Jacks Valley before heading east toward the school and homes.

Topography helped slow the 285-acre fire a little bit after it crested the hill and started down the other side.

No structures were lost in the fire, which threatened around 1,000 homes, 10 businesses, water tanks, and high-voltage power lines, in addition to the school.

Power was shut off to 934 NV Energy customers at the request of firefighters. Jacks Valley Road was closed through the night. The fire was contained on Thursday.

“It was a tremendous effort for our first fire of the season,” he said. “We were able to put a lot of resources on that fire very early. One of the advantages of the new fuels fire crew was that we had all 10 of them on duty on Wednesday. That’s not always going to happen, because we’re not going to be able to schedule when fires take place.”

Carlini pointed out that on windy days there is often more than one fire going at once, which can reduce the number of firefighters to battle a blaze.

“We were fortunate to have a good response from regional partners,” he said. “Sometimes on these windy days, there are multiple fires working at the same time.”

A fire at Meeks Bay started around the same time as the Jacks Valley blaze but was held at 2.6 acres. That fire was caused by a tree being blown into power lines.

The investigation into the cause of the Jacks Valley Fire continues.

“We’re seeing more wind-driven activity,” he said. “The intensity seems to be greater. In some cases, like Wednesday, we have a lot of fuel growth and the fuel density is going to be higher, as well, creating fires that are more aggressive and become more of a challenge for us to manage from a safety factor.”

He said 70 residents went to the evacuation center at the Douglas County Community & Senior Center.

“It went as smoothly as it could have for a rapidly escalating incident,” he said of the evacuation.

In Nevada, only the governor can order a mandatory evacuation, something that hasn’t happed in recent memory.

In addition to three cell phone alerts and a reverse 911 call, Douglas County and Carson City sheriff’s deputies and Search and Rescue team members went door to door alerting residents to the danger.

“The Sheriff’s Office and Search and Rescue did an amazing job going house to house,” Carlini said. “Some people chose to stay, but we had a good complement of fire apparatus doing aggressive structure protection.”

Just as reducing fuels along the pole line helped create a firebreak that kept the blaze south of Jacks Valley Road, residents can create defensible space around their homes.

“Defensible space gives us an opportunity to defend their property, giving us a greater margin for success,” Carlini said.

But it’s not something just one homeowner can do and expect those results.

“It needs to be done as a neighborhood,” he said. “If one person puts in defensible space but their two neighbors don’t, the results can be just as devastating for the person who did the work.”

A fire management assistance grant was approved for the fire that will cover up to three-quarters of the cost from the Federal Emergency Management Agency’s Disaster Relief Fund.