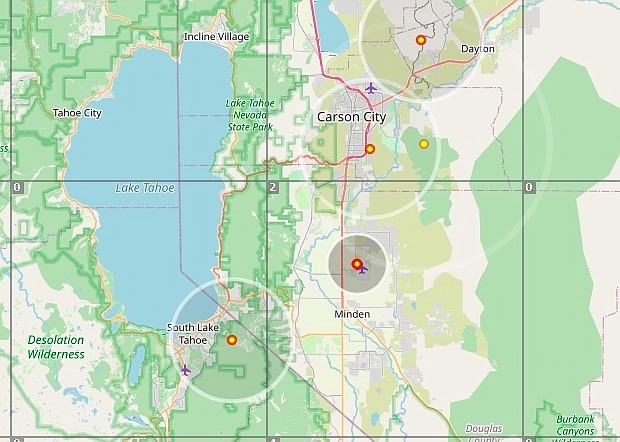 A flash flood watch for Douglas and Alpine continues has been extended until 11 p.m. by the National Weather Service at 6:42 p.m.

A thunderstorm has been heading north through Douglas County sending bolts of lightning into the area.

A flash flood warning has been issued for the Tamarack Fire burn scar in Alpine and Douglas Counties through 7 p.m. Friday.

Excessive rainfall over the scar could result in debris flow through the West Fork of the Carson River.

A thunderstorm dumped about three-quarters of an inch of rain in Topaz Ranch Estates around 5:30 p.m. Friday.

A flood advisory has been issued for Douglas County through 9:30 p.m. Friday for the Pine Nut Mountains. Radar is indicating heavy rain from the thunderstorm at 6:30 p.m. with up to an inch of rain in places.

The storm sent lightning into the Pine Nuts east of Minden-Tahoe Airport, prompting multiple callers to report smoke in the area.

East Fork firefighters and Douglas County deputies responded to East Valley and Stockyard to look for the fire.

The National Weather Service in Reno issued a statement warning of thunderstorms with heavy rainfall throughout the Sierra and Western Nevada.

“Heavy rainfall continues to be the primary concern, especially south of Highway 50 along the Sierra Front,” forecasters said. “Periods of intense rainfall will continue to be possible and may lead to flash flooding.”

Burn scars and steep terrain are most susceptible, forecasters said.

A flash flood watch remains in effect for Western Nevada through 8 p.m. Friday.